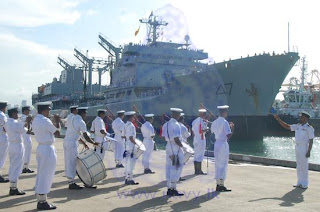 In accordance with naval traditions, the Sri Lanka Navy (SLN) ceremonially welcomed the ships and the crew on arrival. Various events have been planned for the visitors during their stay in Colombo.
According to SLN, PNS Shamsheer is a guided missile frigate with a displacement of 3143.9 tons. It is 123 meters in length and carries a complement of 28 officers and 215 sailors. The ship has a state of the art weapons and surveillance system and is commanded by Captain Ahmed Farooq. 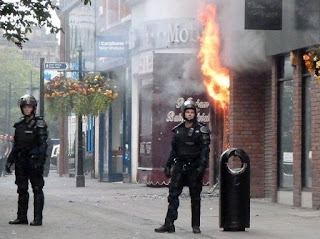 Britain's worst riots in decades raged into Wednesday as youths ran amok in Manchester and the industrial Midlands but London was quiet with 16,000 police swamping the streets to stem violence.
In Manchester, Britain's third-largest city, youths smashed shop windows and looted shops and chased photographers away from the scene in what police described as the city's worst violence in 30 years.
Elsewhere, hooded rioters set fire to buildings in West Bromwich and Wolverhampton in central England and a police station in nearby Nottingham was firebombed, although there were no reported injuries.
Looters also targeted shops in the second city of Birmingham for another night and 200 rioters pelted police with missiles in the northwest city of Liverpool as the nation faced up to a fourth day of unrest.
But in London there was no repeat of the wave of violence which left parts of the capital in flames on Monday night, as vigilante mobs took to the streets to defend their communities.
Police were bracing for more trouble after what they said was the worst night of disorder in living memory in the British capital, and their numbers were ramped up from 6,000 to 16,000 on Tuesday night as Prime Minister David Cameron vowed to do "everything necessary to restore order to the streets".
Shops in many parts of London closed early and put down their shutters on the advice of the police.
Scotland Yard said early Wednesday that 768 people had been arrested in London for violence, disorder and looting.
The focus of Tuesday's violence was Manchester in northwest England, where police were driven back by gangs of hundreds of youths who covered their faces with scarves and ski masks.
Gangs smashed their way into shoe shops and set fire to a girls' clothing store in the city centre.
Two raiders smashed the glass entrance of the Arndale shopping centre, central Manchester's main shopping mall, allowing hundreds of youths to pour into a shop and emerge with armfuls of clothes and shoes.
Looters cleared out an electrical store as powerless police watched on while other gangs squared up to officers and shouted obscenities in their faces, an AFP correspondent reported.
Assistant Chief Constable Garry Shewan of Greater Manchester Police, who joined the force after moving to the city in 1981, called the scenes "senseless violence and senseless criminality on a scale I have never witnessed before."
There were similar scenes in Birmingham, and in the neighbouring town of Wolverhampton youths clashed with riot police brandishing shields.
West Midlands police, which arrested 109 people over Tuesday's disturbances, said it was investigating reports that a shot had been fired during the disorder.
Despite the unrest, police and cricket officials announced that the Test match between England and India, due to take place at the nearby Edgbaston ground, would begin as planned on Wednesday.
In London, hundreds of Sikhs camped out overnight Wednesday to defend the community of Southall in the capital's west.
The group, some dressed in traditional clothing, organised motorcycle patrols and monitored the train station for troublemakers.
Similar mobs of football supporters congregated in Eltham, south London, in an effort to deter looters.
An AFP reporter witnessed a gang of around 150 men running down a street in Enfield, at the centre of much of the previous trouble, shouting "England, England, England".
In a development which will do nothing to calm tensions, Britain's police watchdog said it found no evidence that Mark Duggan -- whose shooting by police last week was the catalyst for the riots in London -- had fired a gun at officers.
In a pre-planned operation, armed officers stopped the taxi in which Duggan, 29, was travelling in the multi-ethnic district of Tottenham in north London. Shots were fired and Duggan died at the scene.
Duggan's family said they were "completely gutted" by the findings and called for "answers" from the police.
Despite the controversy surrounding the shooting, Cameron warned rioters: "You will feel the full force of the law."
Scotland Yard Deputy Assistant Commissioner Stephen Kavanagh said the rampage by hundreds of hooded youths was "unprecedented" and police resources were stretched "to an extent I have never seen before".
He said plastic bullets -- used during sectarian unrest in Northern Ireland but never before in mainland Britain -- have been considered to stem the tide of unrest.
The violence has raised questions about security ahead of the 2012 London Olympic Games, and it prompted the cancellation of Wednesday's friendly between England and the Netherlands at Wembley Stadium.
A 26-year-old man found with a gunshot wound to the head in a car in Croydon died in hospital on Tuesday, police said, becoming the first fatality of the riots.