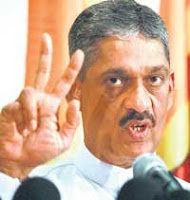 Genaral also said the government would have to take the responsibility for his life in case of any unfortunate eventuality.
Posted by SRI LANKA TODAY at Friday, January 29, 2010

Gen.Fonseka said he was not prepared to accept the results declared by the Commissioner of Elections would seek legal action to get the results annulled.
Posted by SRI LANKA TODAY at Friday, January 29, 2010

Mahinda won as the executive president

t Mahinda Rajapaksa won presidential election as the Sixth Executive President of Sri lanka by a massive majority of over 1.8million votes on 26th january 2010.
Mr. Rajapaksa led in 17 out of 22 electoral districts gaining 57.88% of the votes polled.