President Rajapaksa took oaths as in for his second term

President  Rajapaksa took oaths as in for his second term 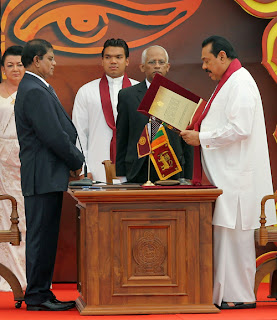 President Rajapaksa was elected in 2005 but opted for early presidential elections in January this year, nearly two years ahead of the end of his term.

The president's popularity shot up after ending the three decade old war against the Tiger terrorists in May 2009. He reaped the benefits of early elections and secured 57.8 per cent of the vote. His main rival, the combined opposition candidate Sarath Fonseka, got only 40.21 per cent.

The ruling United People's Freedom Alliance government led by Rajapaksa is also in a strong position after securing 143 seats in the 225-seat parliament in the April elections. It later won the support 17 more opposition members to gain a two-thirds majority.
Posted by SRI LANKA TODAY at Friday, November 19, 2010