Pillayan to be sworn in tomorrow?

Pillayan to be sworn in tomorrow?


TMVP leader Sivanesathurai Chandrakanthan alias Pillayan will be sworn in as chief minister of the Eastern Province at the auspicious time of 2.07 pm tomorrow (May 16th), Senier government minister told to the media. 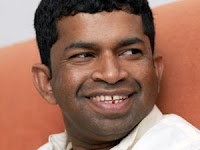 Mr. Chandrakanthan has been invited by an official of the Presidential Secretariat to be at the venue by 1.30 pm for his oath taking.
The president will announce his choice for the post of East CM at a meeting with Muslim government ministers at Temple Trees this evening.
Posted by SRI LANKA TODAY at Thursday, May 15, 2008