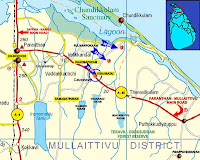 Troops of the 58 Division after hours of fierce fighting that ensued with LTTE have reached the Visuamdu junction, this afternoon (Jan 28). According to latest reports received, troops have now gained total control over the Visuamadu town, following initial search and clearing operations conducted in the area, security sources said.

LTTE resistances were rattled during the multi-frontal military assault, ground sources said adding that scores of terrorists were killed and many injured during the fighting.
http://www.defence.lk/new.asp?fname=20090128_09
Posted by SRI LANKA TODAY at Thursday, January 29, 2009