Kumar Sangakkara has returned to the top 10 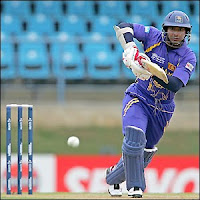 batsmen after a run of stellar performances in the just-concluded tri-nations series in Bangladesh.Sangakkara not only won the player of the series award for his scores of 7

4, 60, 17 not out, 68 and 55 but has also been rewarded with a jump of six places in the latest rankings, which puts him in 10th position for the first time since February 2009.The left-hander is now Sri Lanka's highest-ranked batsman, leapfrogging opener Tillakaratne Dilshan who has climbed two places to a career-best ranking of 13th.
Posted by SRI LANKA TODAY at Friday, January 15, 2010