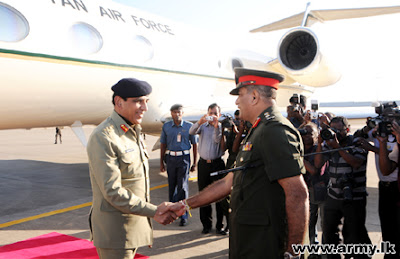 Pakistani Chief of Army Staff (COAS) General Ashfaq Parvez Kayani accompanied by his spouse Mrs. Zahida Kayani is currently on a visit to Srilanka.
Since independence, and have consistently maintained close, cordial and mutually supportive relations especially in the field of defense. Both nations have assisted each other during testing times in their history. 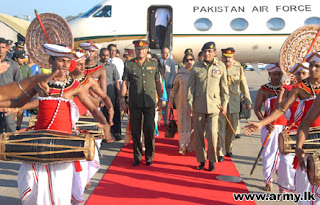 Besides meetings with the top leadership of the country and address to the student officers at the Srilankan Defense Services Command and today, General Kayani will also be formally inaugurating the Srilanka Chapter of The Quetta Association. 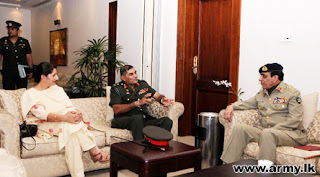 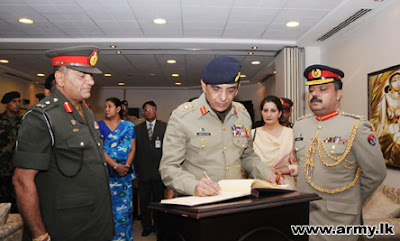 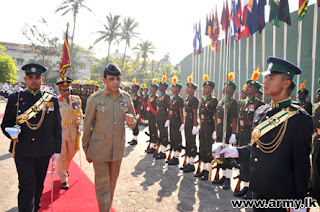 The Quetta Association will operate as a dynamic forum for both the defense forces to identify common threats and evolve common strategies to face current regional and global threats and challenges. The scope of the Quetta Association will be gradually enhanced to also engage Ex graduates of the other premier defense institution of like , and Tactics, , , etc.
and  have comprehensive and mutually beneficial training collaboration for Army, Navy and Air Force. Over a period of time, a strong bond of commitment and mutual understanding has been reached between both the friendly armed forces. In future too, both the brotherly countries are expected to work more closely in the field of defence to boost peace efforts in the region. 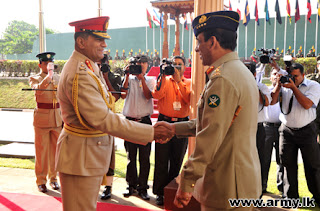 General Ashfaq Parvez is the focal leader behind this challenging Global War against Terrorism efforts. With his superb command and prudent strategic direction Pak-Army has successfully flushed out militants from picturesque , where peace and normalcy has been completely restored.


The COAS with his deep understanding of the GWOT and patriotic intent has not only safeguarded vital national interests but also brought admiration for amongst the whole world. 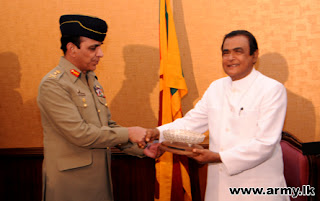 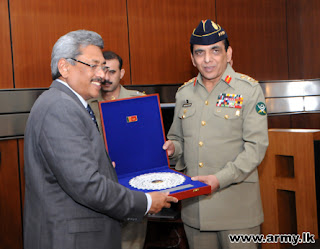 As COAS he never overlooked the welfare of his brave troops and declared his first year of command as “Soldier’s Year” that witnessed extensive welfare projects for the soldiers of Pak-Army. 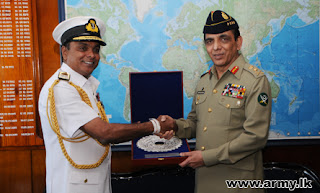 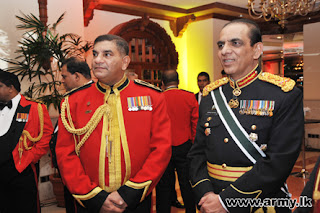 General Ashfaq Parvez Kayani took over as the new Chief of Army Staff (COAS) after General Musharraf's retirement on . General Kayani is the first officer in the history of who held the position of DG ISI and then went on to become the Chief of Army Staff (COAS). Presently in Global War on Terror (GWOT), a major and critical role is being played by Pak-Army.
The visit of ’s Army Chief is highly significant as it is the first visit of ’s Army Chief to following the defeat of LTTE in 2009. During the 3 decade long war against LTTE, played a crucial and decisive role by assisting the Srilankan Government and the armed forces. The visit of ’s Army Chief provides an opportunity to the two brotherly countries to exchange expertise and also provide an occasion for further strengthening of future relationship in the present context.
Posted by SRI LANKA TODAY at Friday, January 21, 2011

GREATLY VALUES ITS RELATIONS WITH .
OUR RELATIONS ARE BASED ON MUTUAL TRUST AND SHARED INTERESTS IN MAINTAINING REGIONAL PEACE, SECURITY AND STABILITY: NAEK 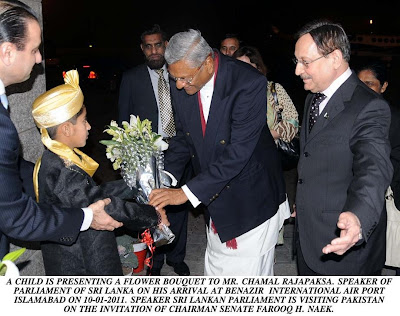 greatly values its relations with . Our relations are based on mutual trust and shared interests in maintaining regional peace, security and stability. This was stated by Chairman Senate, Mr. Farooq H. Naek while talking to a visiting Speaker of Sri Lankan Parliament, H.E. Chamal Rajapaksa and members of his delegation who called on him at the Parliament House here this evening. 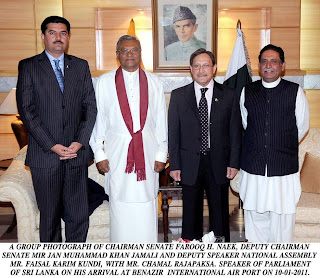 The Chairman said fully supports the unity, territorial integrity and sovereignty of . Our two countries enjoy commonality of views on regional and international issues and coordinate their positions at the United Nations and SAARC, he added. 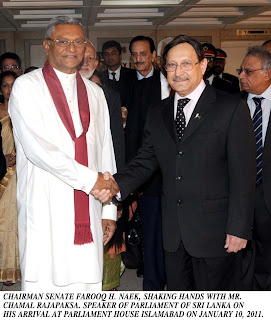 He said is against terrorism in all its forms and manifestations. We are victims of terrorism; we lost our great leader Shaheed Mohtarma Benazir Bhutto at the hands of terrorists. We have lost thousands of innocent civilians and valiant personnel of the armed forces. Terrorism has badly affected our economy and day to day lives, he further added.
Chairman expressed happiness that Sri Lankan Government has been able to defeat terrorism. He said, rehabilitation of the victims of violence and unrest is an issue, but I am confident that would be managed successfully.
He underscored the need for enhanced exchange of Parliamentary delegations between the two countries to promote people-to-people contacts. Such visits will help promote greater cooperation between the two Parliaments, he said. He also appreciated the establishment of the Sri Lanka-Pakistan Parliamentarians Friendship Association.
While apprising the delegation on the damage and devastation caused by the floods in Pakistan, the Chairman Senate said it is the biggest human tragedy in the history of Pakistan, floods have left the entire agriculture sector in shambles, livestock have been equally devastated, standing crops worth billion of dollar have been destroyed. He said that the victims of this immense tragedy need solidarity, concrete help and assistance from the world community.
On the occasion, the chairman conveyed the appreciation of the Government and people of for the flood relief assistance provided by the Government of Sri Lanka.

The Chairman expressed satisfaction over the volume of trade between two countries which has been doubled from US$ 140 million to around US$ 300 million in the last four years. He hoped the figure of US$ 1 billion will be achieved by 2012. He also assured that will continue to work towards economic progress of Sri-Lanka.
While talking on the cultural cooperation between the two countries, the Chairman said that the Government of Pakistan attaches great importance to the preservation of the Gandhara heritage, Buddhist relics and sites, as a standing tribute to the shared past of our two nations. He invited a delegation of Buddhist monks and scholars to visit Gandhara sites in .
Leader and members of the Sri Lankan delegation thanked the Chairman Senate, Deputy Chairman Senate and Honourable Senators for warm welcome and hospitality extended to them and assured all possible help and assistance in consolidating the Pakistan-Sri Lanka relations.
The meeting was attended by Leader of the House in the Senate, Syed Nayyer Hussain Bokhari, Leader of the Opposition, Mr. Wasim Sajjad, and Senators Professor Khurshid Ahmed, Raja Muhammad Zafar-ul-Haq, Mrs. Saeeda Iqbal, Mrs. Semeen Yusuf Siddiqui, Mr. Salim Saifullah Khan, Mr. Abbas Khan Afridi, Saleh Shah and Senator-in-Waiting Sardar Ali Khan.
The Sri-Lankan delegation included Mr. A. H. M. Fowzie, Minister of Disaster Management; Al Haj A. H. M. Azwer, MP; Mrs. Kamala Ranatunga, MP; Mrs. Anoma Gamage; Mr. Seeniththamby, MP and Mrs. Vijayakala Maheswaran, MP.
Earlier, Sri Lankan Parliamentary delegation who is visiting on the invitation of Honourable Chairman Senate, Mr. Farooq H. Naek was received by Deputy Chairman Senate, Mir Jan Muhammad Khan Jamali, Deputy Speaker National Assembly, Mr. Faisal Karim Kundi on its arrival at the , .
Later, the Honourable Chairman Senate hosted a dinner in honour of the Speaker Sri Lankan Parliament and Members of his delegation which was attended by Deputy Speaker National Assembly, Honourable Senators, senior government officials and other distinguished guests.
Posted by SRI LANKA TODAY at Friday, January 21, 2011 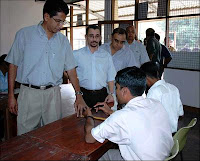 Additional Commissioner of Elections Mr. W.W. Sumanasiri said that during elections no political party is registered. The applications were last called for in May 2010, a month after the completion of the 2010 Parliamentary General Election.
“Every January we call for application to register new political parties. But when there is an election around it is suspended and within one month of the completion of an election we call for application” Mr Sumanasiri told  to  Media.
Accordingly, he said, his Department called for application in May
2010 after the election of 2010 Parliamentary elections. In between
the Commissioner had exchanged letters with parties sought
registration requesting for necessary documents as per the new
amendment to the Elections Act.
Posted by SRI LANKA TODAY at Friday, January 21, 2011