President Mahinda Rajapaksa met with His Holiness Pope Benedict XVI when he visited the Vatican this morning (December 1) and appraised the Pope about current developments in Sri Lanka, especially the clearing of the Madhu Shrine from terrorists, restoring it and making it possible for the faithful to worship there.

Pope Benedict expressed a keen interest in the developments in Sri Lanka and the measures taken by the Government to provide humanitarian assistance to those who have been temporarily displaced and restore democratic freedoms. The Pope also expressed concern about the spread of terrorism in

the region and the need for a more concerted effort 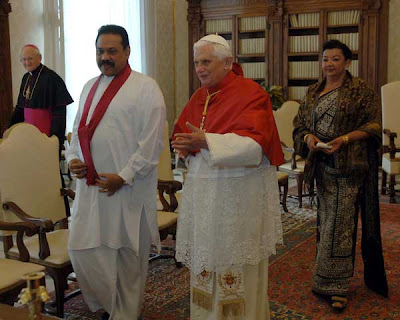 internationally to eliminate terrorism, wherever it may occur.


Later, President Rajapaksa met with the Secretary of State of the Vatican, Cardinal Tarcisio Bertone and briefed him about the successes in the military operations in the North and told him how the LTTE is holding civilians as buffers in areas they control. The President also assured him that all possible measures are being taken to ensure the safety of civilians.
Posted by SRI LANKA TODAY at Tuesday, December 02, 2008