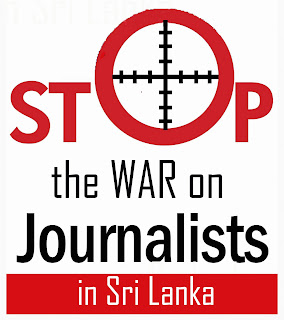 The International Federation of Journalists (IFJ) has today sent a joint letter to the President of Sri Lanka voicing the concerns from over 30 journalists’ associations and press freedom and human rights organisations across the globe for the safety of journalists from the island nation.Addressed to Mr Mahinda Rajapaksa, President of the Socialist Democratic Republic of Sri Lanka, the letter demands an immediate change in the escalating culture of violence against journalists by government officials and members of the public.


This letter is the first of a series of actions for the ‘Stop the War on Journalists’ campaign for Sri Lanka which will culminate with world Press Freedom Day on May 3 and the release of the IFJ’s annual South Asia Press Freedom Report for 2007-2008.A global day of action has been called for April 10, 2008. This day, which falls two days before Sri Lanka’s Sinhala and Tamil New Year celebrations, will send a message of hope and strength to the band of journalists’ organisations in Sri Lanka who have continued their fight for press freedom despite dangerous circumstances involving high risks to the personal safety of themselves and their families.“Sri Lanka has long been considered one of the most dangerous countries in the world for journalists, but the situation is becoming ever more serious,” said IFJ Asia Pacific Director Jacqueline Park. “Our colleagues in Sri Lanka need to know that the international press freedom and human rights communities stand in solidarity with them and support their tireless work.”All journalists’ associations, media organisations and press freedom and human rights groups are invited to add their name to the joint letter as well as send their own letters to the Sri Lankan embassies in their countries on April 10 and display the campaign poster on their websites, at rallies and in the press at any opportunity.
Posted by SRI LANKA TODAY at Thursday, March 27, 2008 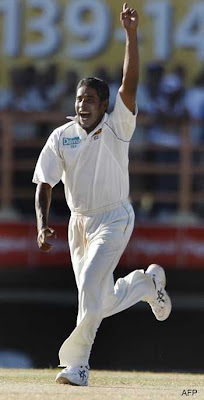 Chaminda Vaas took five wickets to bowl Sri Lanka to their first victory in the Caribbean, defeating West Indies by 121 runs after tea on the final day of the opening test in Georgetown, Guyana.

The home team, set an unlikely victory target of 437, slumped from 156 for one to 315 all out. Out of form captain Chris Gayle, batting at number six instead of his usual opener's spot, hit a defiant 51 not out in 131 balls. West Indies, who began the day on 96 for one, lost stand-in opener Dwayne Bravo before lunch when he was caught and bowled by off-spinner Muttiah Muralitharan for 83. Bravo and Ramnaresh Sarwan shared a partnership of 134 for the second wicket. Vaas then had Marlon Samuels caught behind for 10 before clean bowling Shivnarine Chanderpaul for three off an inside edge. Fellow left-armer Thilan Thushara trapped Sarwan lbw for 72 before tea with a ball that appeared to be going down the leg side.

It was Sarwan's second half-century of the match. He top-scored with 80 in the first innings. In the final over before tea, Muralitharan had Ryan Hinds caught behind down the leg side for 10. Thushara had Denesh Ramdin caught at slip for one in the last session and Muralitharan followed up by trapping Sulieman Benn lbw for seven, leaving West Indies 244 for eight with more than an hour left. The hosts rallied as Gayle and Jerome Taylor added 47 for the ninth wicket but Vaas snatched victory with the second new ball. Taylor was caught at third slip off Vaas for 12 and the Sri Lankan seamer finished things off when last-man Daren Powell (14) was brilliantly caught one-handed by Muralitharan running back at mid-off. Vaas recorded figures of five for 61 while Muralitharan, who bowled unchanged in the morning session, chipped in with three for 112. The second and final test in Trinidad starts on April 3rd.
Posted by SRI LANKA TODAY at Thursday, March 27, 2008 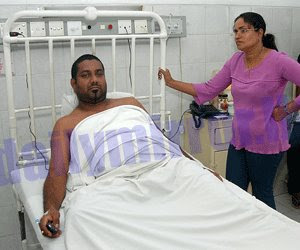 Director of the film ‘Prabhakaran’, Thushara Pieris says he would start a hunger strike today as a mark of protest against the confiscation of his movie cassette by Indian authorities in Chennai. He has been assaulted in India when he went there to obtain the final copies of the film.He ca me back to Sri Lanka and admitted to the private hospital in Colombo.
Pictured here at his hospital bed in Colombo . His wife also near the bed . He is on a hunger strike demanding the prints of his movie back from India.(pix by Daily Mirror)

Thusara Peiries who received critical injuries including a cut on his back at the Gemini Colour Laboratory in Chennai was immediately rushed to Sri Lanka after RAW and Indian police intervened.
Thusara who had vomited several times following the attack is now undergoing treatment at a private hospital in Colombo.
Thusara who completed the Sinhala version of his film which revolves around the ethnic conflict in Sri Lanka and recruiting of child soldiers had gone to India on March 20 to make the Tamil version of the film.
“Throughout last week the problem was there and the film was a hot subject that was given prominence in the Indian media creating headlines. I was not very much aware what was going on. However there had been massive and misleading propaganda claiming that the film was anti-Tamil,” Thusara said few minutes before he was admitted to the hospital.
A violent mob of more than 1000 which included Indian film directors, producers and technicians started a protest in front of the Gemini Laboratory from Tuesday morning.
Thusara who had completed his work and was coming out of the lab was question by some people in the mob who were waiting outside.
“I realized that the mob was getting violent and somebody asked me to run back to the lab and I started running. They chased after me and started to attack me. They hit me on my head and I felt a cut on my back and then passed out After about 45 minutes I came to my senses and realized that all my clothes were torn and I was lying on the ground. The crowd was still shouting slogans,” Thushara said.
During the attack I heard them mentioning President Mahinda Rajapaksa’s name and I realized that they shouting that I had made a film for President Rajapaksa, which was totally wrong.
Later the media and police had rushed to place and the assailants themselves had brought a new shirt and forced him to wash his face and kept him under hostage in a room in the laboratory.
“I was not allowed to talk to the media by those assailants nor the police,” Thusara claimed.
Later officers of the Indian intelligence RAW and Police had escorted Thusara to his hotel where all his belongings were packed and prepared to send him back to Sri Lanka immediately. 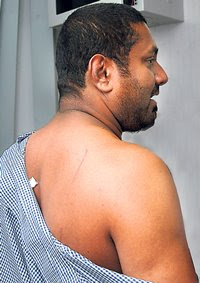 “As I was entered the hotel all my belongings were ready at the entrance with my passport and I was taken to the airport where a number of RAW officers gave me protection,” he said.
However before returning to Sri Lanka Thusara was forced to participate in a conference where officers from Indian Police, film producers and technicians and Censor Board officials participated.
“There the technicians demanded that they wanted to see the film to which I agreed and requested them to screen it at the Gemini Lab. There I was made to sign a document which stated that if there was any scene which was anti- Tamil or anti-terrorist, the film would not be screened in India,” Thushara complained.
The young filmmaker had to leave the film at the Gemini Laboratory and leave India.
“I am worried about my film which I made spending nearly Rs. 40 million and I requested the Sri Lanka High Commission in India to protect my work of art,” he requested.
However Thushara complained that the Sri Lankan High Commission was aware about the tense situation that was gradually developing over the week and had not taken any step.
When contacted by the Daily Mirror, Sri Lanka Film Corporation General Manager Saman Weeraman said that he had received no information about the incident.
The Sinhala version of the film was to be released from April 25 in Sri Lanka and it was passed by the Censor Board and was seen by high ranking Army officers while the President Rajapaksa had wanted to see the film.
The filmmaker requested the relevant authorities to protect his film for all Sri Lankan and Tamils around the world to see.
Eight copies of the film were to be released worldwide.
“This is not a pro-government or anti-LTTE film. It is a film about loss of humanity as a result of the thirty-year-old war and to show the LTTE view of the Sinhala community.
Posted by SRI LANKA TODAY at Thursday, March 27, 2008