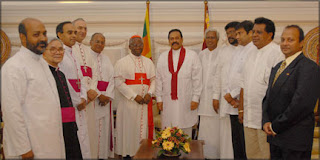 The entire Catholic community in Sri Lanka should be grateful to President Mahinda Rajapaksa for liberating the historic Madhu Shrine from the terrorists and restoring to the Church, Vatican Cardinal Francis Arinsay said when he called on the President at Temple Trees yesterday(Sep 16).

President Rajapaksa said the adherents of all religions in Sri Lanka always act with mutual understanding and commended the patronage extended by all religious leaders in this connection.

A delegation from the Asia region for the Liturgical Convocation of the
Catholic Church called on President Mahinda Rajapaksaat Temple
Trees yesterday. The Leader of the Delegation His Eminence Francis
Cardinal Arinze, Prefect of the Congregationfor Divine Worship and the
Discipline of the Sacrament, Vatican State, Rev. Mario Zenari,
the Titular Archbishop of Zuglio and the Apostoli Nuncio
in Sri Lanka, Rev. Malcom Ranjith, Secretary of the congregation
for Divine Worship and the Disciple of the Sacrament, Vatican
City State, Ministers Milroy Fernando, Neomal Perera and S
arath Gunarathna were present. Picture by Chandana Perera
tual understanding and commended the patronage extended by all religious leaders in this connection.

"The Security Forces liberated Madhu Shrine to further consolidate the religious freedom and peaceful co-existence among fellow-citizens. The Security Forces were cautious enough to conduct their operations to ensure no damage would be caused either to the Madhu Church or the nearby buildings," the President said.

Although the retreating terrorists inflicted damage to the Church, the Security Forces renovated the buildings and handed back to the Church authorities to conduct the religious observances, he said.

Cardinal Arinsay said only after his arrival in the island he was able to see the actual situation.

"Sri Lanka is blessed with natural beauty," he said.

The targets were acquired with precision on reliable ground information received Air Force Spokesperson, Wing Commander Janaka Nanayakkara said.
The target at Vattakachchi area has been identified as a secret LTTE hideout and was engaged on real-time information received of the presence of a key LTTE figure, defence intelligence sources said. This is a site most frequented by the LTTE chief, and LTTE is expected to remain tight lip on the casualty figures, defence observes state.
Posted by SRI LANKA TODAY at Wednesday, September 17, 2008

Explosion inside bus at Horton Place

A bomb had exploded inside a bus at Horton Place. The passengers had been evacuated before the explosion took place. Four people have received minor injuries.
Posted by SRI LANKA TODAY at Wednesday, September 17, 2008

UN completely out of Kilinochchi

UN completely out of K’nochchi 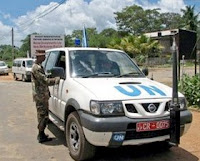 Citing a statement issued by him, BBC Sandeshaya reported the UN has received assurances from the LTTE that UN and humanitarian agency staff remaining in Kilinochchi can leave.
Posted by SRI LANKA TODAY at Wednesday, September 17, 2008