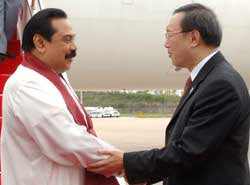 
President Rajapaksa was given guard of honour by Chinese Combined Armed Services as was received by a large number of flag and flower waving Chinese youth.
Posted by SRI LANKA TODAY at Thursday, April 10, 2008