Veteran musician Mervin Perera passed away last afternoon (07) while being taken to the . He was 69.

Mervin Perera has many lilting melodies to his credit and was much loved by Sinhala music lovers. He had served as a music teacher at Government schools for a long period of time.

He was a father of three children, was born on September 21st, 1940 at Kuda Payagala in and received his primary education at the Payagala Roman Catholic School.
Posted by SRI LANKA TODAY at Wednesday, December 10, 2008

Karu's son-in-law Naveen will not return to the UNP

Karu's son-in-law Naveen will not return to the UNP

e UNP although he is the son-in-law of ex- Public Administration Minister Karu Jayasuriya who re-crossed to the UNP on Monday. Following Jayasuriya’s return to the UNP there was widespread speculation that his son-in-law

Dissanayake yesterday told The Island that his father-in-law returned to the UNP due to some differences he had with President Mahinda Rajapaksa. "I tried my best to bring about a settlement but Jayasuriya was hurt and determined to return to the UNP," Dissanayake said.

Public Administration Minister Karu Jayasuriya resigns
While Public Administration Minister Karu Jayasuriya officially announced his resignation from the post last evening and left the government to accept the post of deputy leader of the UNP, the remaining members of the UNP Democratic Group decided to stay with the government.

Mr. Jayasuriya, who issued a statement, said he could not agree with the ideas of this government regarding the economic crisis, though he approved of the steps taken to defeat terrorism: “This economic downturn is becoming a crisis which will greatly affect the people,” he said in his statement. He further pointed out that the government, in which he had held a ministerial portfolio, had not been able the implement the 17th Amendment: “The campaign for the implementation of the 17th Amendment began with a citizens’ committee and later grew into a vast civil movement; and it would be a breach of trust on my part to remain with the government, as the people had placed their trust in me and I, too, was involved in this campaign,” he said.

At the 53rd congress held on Saturday, UNP leader Ranil Wickramasinghe made an open invitation to the crossed over UNPers to rejoin the party to build the country. 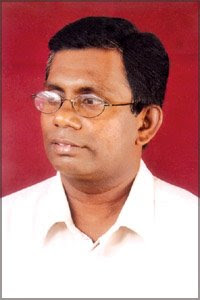 Sri lanka journalist team had mutual discussions higher officials in pakistan. This team was cordially invited by the Assistant Secretary(South Asia) to the ministry of Foreign Affairs Mr.Aizaz Ahamad chaudhry.

Sri lanka journalists team has exchanged views with Naeem Chaudry who is the director of APP news.