Making another military pledge a reality, the centuries-old sacred Madhu Church, where all communities worshipped will be opened to the public soon for the annual feast. The shrine was liberated by the Security Forces from LTTE terrorists.

The sacred Madhu Shrine which was liberated from LTTE terrorists was handed over to Rev. Fr. Victor Susai, Vicar General of Mannar, who accepted it on behalf of the Bishop of Mannar yesterday.

Army Commander Lt. General Sarath Fonseka called upon those who removed the statue of Our Lady of Madhu to bring it back to the church.

"Those who were in charge of the statue have the responsibility of bringing it back", he said adding that the Madhu area would be declared as a security zone and pilgrims would be provided all facilities to worship at the shrine.

The Madhu shrine, where thousands of pilgrims gather during the August church feast was under the clutches of the LTTE from 1999. The shrine area later became a military base for the LTTE positioning its heavy guns around the church premises.

The LTTE used the shrine as a shield to avoid military offensives within the 'No War Zone' and the Army was compelled to refrain from attacking the terrorists because of the sacred shrine complex.

Lt. Gen. Fonseka said that the 57 division supported by the Light Infantry unit tactically forced the terrorists who occupied the shrine to withdraw but the fleeing terrorists damaged the roof of the main church and the adjoining hall.

According to Lt. Gen. Fonseka, the area has been heavily mined with anti personnel mines and booby traps and bunkers have been erected around the shrine. "The military will soon complete clearing the mines", he said.
Posted by SRI LANKA TODAY at Sunday, April 27, 2008


LTTE aircrafts dropped three bombs at the Welioya Forward Defence Line in the North early this morning but the military says it did not cause any major damages.
espite heightened ground confrontations between troops and LTTE at the Wanni battle theatre, it was reported that 3 bombs were dropped by LTTE today (April 27) at the military forward defence lines in Welioya at around 1.45 a.m.

According to military Spokesperson Brigadier Udaya Nanayakkara, no damages were caused to own troops in the aerial bombing.

"During the wee hours the SLAF air defence network radars detected 2 light aircraft of LTTE which were airborne and heading towards Welioya. In accordance with standard operating procedures, SLAF interceptor aircraft were made airborne in the direction of the intruding enemy craft. However, enroute to the area it was observed that the LTTE air craft were fleeing and heading back", air force sources were quoted as saying in a press release issued.

According to military sources, these failed attempts by LTTE are sheer signs of desperation by the outfit to unwind its present sorry situation. The LTTE is suffering with increasing defeats at the hands of military, and troops deployed at Weiloya are constantly pushing LTTE to relocate its defences closer to it last bastions in Kilinochchi and Mullaittiuvu districts, defence sources said.
Posted by SRI LANKA TODAY at Sunday, April 27, 2008


Sri Lanka army has liberated the sacred Madhu shrine by beating off the occupying LTTE terrorists today morning (April 25). The soldiers of 8 Sri Lanka Light Infantry reached the shrine as the terrorists beat a retreat unable to withstand the army advance.

The centuries old Catholic shrine is held sacred and respected by all Sri Lankans irrespective of religion and ethnicity. Thousands of pilgrims used to visit the shrine, especially during the church feast in August, before the terrorists took control of the area in 1999. 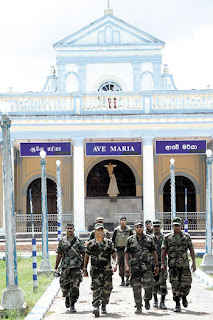 As LTTE terrorists unleashed their "Final War" in 2006, the church became a sanctuary for thousands of civilians who wanted to avoid their children being conscripted by the terror outfit. Later, LTTE agents acting under religious facades, evicted these civilians and unashamedly made many of them to fall prey to the terrorists.

Gradually, the terrorists almost turned the shrine into a terror base by positioning its heavy guns around the church and using it as a barrack for its cadres. Though this desecration has [Click to magnify/shrink] been carried out for last few months the fact was kept secret from the general public until the sacred statue of Our Lady of Madhu was shifted two weeks ago.

Meanwhile, Army 57 division battling against the terrorists on the Vavuniya battle front, tactically removed most of the terrorists' lines of communication to what had then become the terror stronghold inside the Madhu complex, making the occupying terrorists isolated from the rest. Army specifically resorted to this slow and painstaking tactical measure in order to avoid any military operations within the Madhu "No War Zone". Many soldiers had to sacrifice their lives and limbs in this endeavour as they refrained from any retaliation to shells launched from the vicinity of the church complex.

The mode of operandi became a success as the terrorists started to withdraw amid the increasing military pressures outside the no war zone. The LTTE bands, "Malathi", "Radha" and "Charles Anthony" withdrew from the area after shifting their heavy guns. A small LTTE element lead by a terrorist leader "Gopith" was the last known terror group to remain at the church.

At present, army troops are clearing the surroundings of the church, as there is a strong possibility that the terrorists have booby-trapped the church building before they left.
Posted by SRI LANKA TODAY at Sunday, April 27, 2008


A TMVP political cadre was shot dead in Batticaloa a short while ago. TMVP spokesman Azad Maulana said the 19 year old victim was killed while he was taking part in election propaganda.
Posted by SRI LANKA TODAY at Sunday, April 27, 2008

A bomb exploded in a parked passenger bus at Piliyandala junction bus stand around 6.45 PM 25TH aPRIL killing 26 civilians including a Buddhist monk and injuring 70 people. The ill fated Central Transport Board bus was a route number 157 Kahapola-Piliyandala bus.
PIX BY :lANKA ENEWS.COM 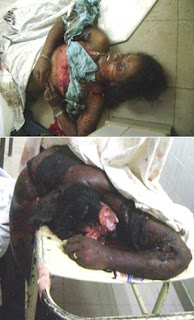 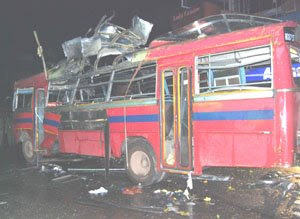