ImageDr.Dayan Jayatilleka, Sri Lanka's Ambassador and Permanent Representative to the UN in Geneva, has been nominated as a member of the Consultative Group of the United Nations Human Rights Council, representing Asia.
Posted by SRI LANKA TODAY at Saturday, July 19, 2008 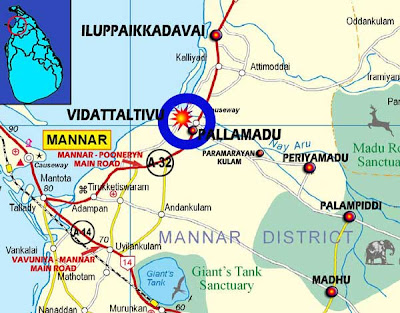 Soldiers of Task Force 1 on Tuesday evening (July15) commenced their forward march from their initial locations at the Southern limits of Vidattaltivu town, i.e. few hundreds meters short of Vidattaltivu terror defence, located 2 Km South of the town. These troops were able to capture a 2.5km stretch of the LTTE Forward Defence by late in the evening.

Unable to withstand the military onslaught, terrorists started to flee further northwards towards and later suffered heavy damages during their withdrawal as the elite commandos flanking in the Northeastern boundaries of Vidattaltivu laid an ambush on them. The commandos confronted with a group of approximately 60 LTTE cadres around 1.45 p.m. As the terrorist started to withdraw towards Iluppaikkadaval, North of Vidattaltivu; commandos called in indirect fire. As a result, heavy artillery and multi barrel rocket fire were directed at the terrorists. Also, Air Force launched close air support missions to ground troops using MI 24 helicopter gunships. Ground troops claimed over 30 terrorists were killed due to artillery and air assault while the rest turned tail.
Read More.http://www.defence.lk/new.asp?fname=20080715_11
Posted by SRI LANKA TODAY at Saturday, July 19, 2008

Karunanidhi demands Katchatheevu back from SL

At a fast in Tamil Nadu today against attacks on Indian fisherman allegedly by the Sri Lankan Navy, Chief Minister M Karunanidhi said the Indian Central government should help get back Katchatheevu from Sri Lanka.
Posted by SRI LANKA TODAY at Saturday, July 19, 2008

Sleepers on the rail track removed in protest

The officials of Urban Development Authority (UDA) assisted by a riot police squad demolished the houses of Glenny Passage in Slave Island(Colombo 2) ignoring the interim injunction of the Supreme Court issued yesterday morning (18).

The Supreme Court order was informed to UDA after eight houses were demolished but the temporarily stopped demolition was restarted with riot police guard using back haws later. UDA officials said they were not aware of a Supreme Court ruling.

he houses using back haws. The residents attempted to stop the action amidst riot police attacks of tear gas.

The angered residents removed the sleepers of the railway track in Slave Island in protest of demolishing their homes of almost five decades temporarily bringing the railway traffic to a halt temporarily. People were blaming the government and police and police were seen armed with batons and shields.

WHO 'S PROTECT US?

Daily Mirror reporter Yohann Perera who was there to report the incident was attacked by a UDA official and he has lodged a complaint in Slave Island police in this regard.

The displaced residents were cursing the authorities as their houses were demolished.
Photos: Houses are demolished by UDA back haws and the protes

ts of the residents)