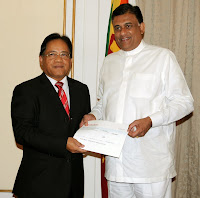 The Foreign Minister then recalled the various meetings and interactions he had had in the recent past with Malaysia’s Minister of Foreign Affairs and also referred to the continued dialogue between H. E President Mahinda Rajapaksa and the Prime Minister of Malaysia, Hon. Dato' Sri Mohd Najib bin Tun Abdul Razak, which have further strengthened the relations between the two countries.

Responding to Foreign Minister Bogollagama, High Commissioner Ismail congratulated the Government of Sri Lanka on the defeat of LTTE terrorism after over 30 years and referred to the defeat as a “big achievement” while reiterating the message of the Malaysian Prime Minister in this regard. He also emphasized the Malaysian Government’s willingness to participate in the economic development of Sri Lanka and assured that Malaysia would continue its economic assistance to Sri Lanka.

Foreign Minister Bogollagama then noted that Malaysia is one of the largest investors in Sri Lanka and expressed hope that further investment would be forthcoming from Malaysia, especially in order to rebuild and develop the north and eastern parts of Sri Lanka. He also pointed out that there were many Sri Lankan investors who had invested in Malaysia and stated that he was pleased that Malaysia was also keen to continue its investments in Sri Lanka, which he said would be mutually beneficial to the two countries. He further stated that the bilateral relations shared between Sri Lanka and Malaysia were “multifaceted” and that both countries work closely on economic and political matters. He added that he looked forward to the continued cooperation between the two countries.