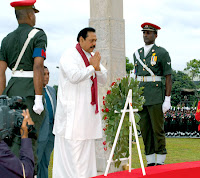 The War Heroes Day to pay tribute to brave soldiers of the Security Forces who continue to defend the motherland at the expense of their lives, was celebrated in Colombo under the patronage of President Mahinda Rajapaksa at the Sri Jayawardenapura Parliament grounds yesterday. The Army band provided the melody to the theme song on war heroes after the President unveiled the plaque that speaks of the bravery of the Security Forces and the Police. The climax of the occasion followed with the opening of the Ranaviru Monument where names of all war heroes, who fought for the country remain inscribed.
Posted by SRI LANKA TODAY at Monday, June 09, 2008