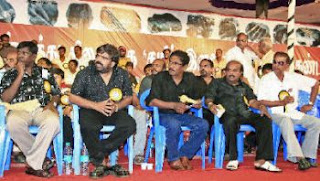 RAMESWARAM: Even as a few leading Tamil actors stayed away from the protest rally, a large number of artistes and directors of the Tamil film industry staged a protest here on Sunday against the killing of innocent Tamils in Sri Lanka.

Led by director Bharatiraaja and producer Rama Narayanan, they took out a rally from the Agnitheertha Kadarkarai to Kilakadu ground near the bus stand. Members of about 25 associations of the industry took part in the rally that went along the important roads of the island town amid tight security.

Wearing black shirts, black badges, the protesters shouted slogans against the Sri Lankan government for waging a war against the Tamils. Many carried placards and banners highlighting the suffering and agony of Tamils in the island nation. A few placards urged Sri Lankan President Mahinda Rajapaksa to respect “human rights” and international conventions to be followed to protect citizens.

A group burnt the effigy of the Sri Lankan President at Thittakudi junction.

Later, they held a meeting at the Kilakadu ground in which most of the speakers urged the Central government to use its good offices to persuade Sri Lanka to stop the war immediately and put an end to the suffering of Tamils, majority of whom are of Indian origin.

India state elections announced
Assembly elections will begin in five Indian states next month.Voting will be held in Rajasthan, Delhi, Mizoram, Madhya Pradesh and Chhattisgarh, Chief Election Commissioner N Gopalaswamy said.
Polling will take place from 14 November to 4 December. No decision has been made about Kashmir elections.

Parliamentary elections are due in the first half of next year and analysts say the state polls will give a sense of how the electorate may vote then.

Elections in Indian-administered Kashmir are not planned for now, the Election Commission said.

"No decision has been taken with regard to the elections in Jammu and Kashmir. We are still assessing the situation," Mr Gopalaswamy said.

Voting will be held in the central state of Chhattisgarh in two phases on 14 November and 20 November.

The capital, Delhi, and the north-eastern state of Mizoram will vote on 29 November.

Madhya Pradesh in central India will go to the polls on 25 November, while the western state of Rajasthan will vote on 4 December.

The counting of votes will take place on 8 December for all states with electronic machines.

Analysts say the assembly elections will test the political temperature before the general election which is due in early 2009.

India's governing Congress Party will be looking to return to power for the next five years while the main opposition Bharatiya Janata Party (BJP) will be fighting to defeat the Congress.

During the telephone conversation, the Prime Minister expressed his deep concern on the deteriorating humanitarian situation in the North of Sri Lanka, especially on the plight of the civilians caught in the hostilities. He emphasised that the safety and the security of these civilians must be safeguarded at all costs. The Prime Minister also said that, in order to address the humanitarian situation, continued and uninterrupted relief supplies be ensured for the Internally Displaced Persons. President Rajapaksha assured the Prime Minister that all necessary measures are being taken to ensure the safety and wellbeing of the Tamil community in Sri Lanka.
Prime Minister Dr. Manmohan Singh further mentioned that the rights and the welfare of the Tamil community of Sri Lanka should not get enmeshed in the on-going hostilities against the LTTE. He reiterated that there was no military solution to the conflict and urged the President to start a political process for a peacefully negotiated political settlement within the framework of a united Sri Lanka. He also emphasised the need to nurture the democratic process in the Eastern Province.

The Prime Minister asked President Rajapaksa to instruct the Sri Lankan Navy to desist from firing on Indian fishermen and reiterated that killing of fishermen is unacceptable. They agreed to work on practical arrangements to prevent such incidents.

President discusses situation in the North with Indian Prime Minister

President discusses situation in the North with Indian Prime Minister
President Mahinda Rajapaksa had a telephone discussion (18 October 2008) with Indian Prime Minister, Dr. Manmohan Singh, during which he briefed the Indian leader on the current situation in the North, where the security forces are engaged in an operation to disarm the LTTE and restore democracy, peace and stability to the region. President Rajapaksa reiterated that the security

forces are under strict instructions to avoid causing any civilian casualties, during this operation. He also informed Dr. Singh that Sri Lanka is mindful and appreciative of the concerns of India regarding the situation in the North, and aware of the context in which these matters have been raised.


Both leaders agreed to maintain a dialogue at a high political level, in keeping with the longstanding and excellent bilateral relations between India and Sri Lank
Posted by SRI LANKA TODAY at Monday, October 20, 2008

N. Ram, Editor-in-Chief of Hindu The, has strongly condemned "the illegal acts of mischief and violence" by activists of the pro-LTTE fringe group, the Periyar Dravidar Kazhagam (PDK), along with a handful of anti-social elements, targeting the newspaper in three recent incidents at Coimbatore and Erode.

"These unruly and illegal acts were an expression of intolerance of the newspaper's criticism of pro-LTTE and pro-Eelam chauvinism in the Tamil Nadu political arena," he said in a statement, adding: "In our considered editorial assessment, these chauvinistic, pro-separatist tendencies are deeply inimical to the interests of the Indian people. Hearteningly, the overwhelming majority of the people of Tamil Nadu, who do not want a replay of the propaganda campaigns and violent activities of the terrorist Tamil Tigers in one of India's most peaceful States, firmly oppose these chauvinistic tendencies."

In his statement, Mr. Ram expressed satisfaction over the prompt response of the police in Coimbatore and Erode to these criminal acts, which constituted "a threat to the physical safety of our journalists, non-journalistic staff, and others working for us, and to freedom of expression, guaranteed under Article 19(1)(a) of the Indian Constitution."

He wanted the police and the Tamil Nadu Government to take stronger action under the law of the land against the extremist fringe outfits and the individuals, including lawyers, behind these illegal acts. "We expect the police and the State government," Mr. Ram said, "to monitor and pursue seriously the prosecution of these cases, so that exemplary punishment under the law of the land is meted out to those who menace freedom of expression in the cause of a banned terrorist organisation."

Fight not against Tamils, but against LTTE terrorism -Defence Secretary

Fight not against Tamils, but against LTTE terrorism -Defence Secretary
While concerns about the plight of Wanni civilians escalated with more MPs from the Tamil Nadu Government resigning in protest and demanding the intervention of the Indian Central Government, the Sri Lankan Government reiterated its commitment to end LTTE terrorism. While the issue has reached boiling point in Tamil Nadu which is going for its elections soon, Sri Lanka's no nonsense Defence Secretary Gotabhaya Rajapaksa said that it was very unfair for Tamil Nadu to demand of the Indian Government, which has a longstanding relationship with Sri Lanka, to pressurise the Sri Lankan Government to halt military offensives against the LTTE. Rajapaksa, who fought many battles against the LTTE when he was in the Army, told the Sunday Observer that the fight is not against Tamils, but to combat LTTE terrorism.

"More than for us, terrorism is a serious problem to India. Therefore, India should assist us more to defeat The Tamil United Liberation Front has appealed to governing officials in the Tamil Nadu (TN) to exert pressure on the LTTE to set free those Tamil civilians trapped in Kilinochchi so that they may go anywhere they want to.

The moment the LTTE opens its iron gate the displaced persons will move out in no time and get back to their respective homes, the president of TULF V.Anandasangaree has said in a letter addressed to Tamil Nadu, titled Appeal to the leaders of Political Parties and the People of Tamil Nadu.

The TULF President has said that if Tamil Nadu has any sympathy for the Tamil people who are suffering under the subjugation of the LTTE, it has a moral obligation to win them (the Tamil public) the fundamental right of being able to choose the place they wish to live.

In this war situation people who are living with fear and tension in Killinochchi should be rescued by Tamil Nadu by pressurizing the LTTE, compelling them to set the Tamil public trapped in their areas free , the letter said. .

The time has come for the leaders in Tamil Nadu to forget their differences and come together to help liberate the Tamils who have lost their rights, properties and self respect. The immediate task should be to save the innocent people who have been trapped in Killinochchi with no freedom to move out, the letter said.

It read: For more than quarter of a century the LTTE had taken Tamil people for a ride. The Tamils need liberation only from the LTTE. The government had already liberated large areas from the LTTE , the East in full and in the North well over 75 percent. Now only a small area is left.

It is here all the displaced persons from Mannar Mullaitivu, Killinochchi and Vavuniya are driven into. The LTTE had brought them here under compulsion for their own protection. They are now using them as a human shield.

Sangaree has said in his letter that he was shocked at the terminology used to describe the situation in Sri Lanka. The charge of the LTTE that the Government of Sri Lanka is engaged in genocide is a big farce, the letter said.

More than 50 percent of the Tamil people now live among the Sinhalese and Muslims. Most of them had fled from LTTE controlled areas. LTTE's repeated attempts to provoke a backlash in the Sinhalese areas had failed.

All their claymore mine attacks in the Sinhalese areas, targeting service personnel and civilians are done to spark off communal riots. Hardly one such incident takes place without taking a few civilian lives. There has not been any attempt as such to exterminate anyone deliberately or otherwise. A few deaths had taken place in the war zone but this cannot in anyway be classified as Genocide. 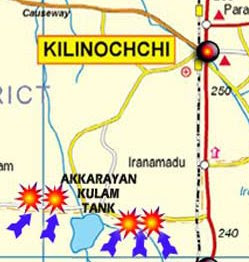 LTTE fires gas on troops
Troops moving from the east of the Akkarayankulam tank had to slowdown their advance at the initial stages yesterday as the LTTE had launched poisonous gas attacks at them, the Defence Ministry said today. However it said troops withstood the chemical attack.
Posted by SRI LANKA TODAY at Monday, October 20, 2008

Batticaloa town shops, schools and transport have come to a standstill due to a hartal in protest of forced disappearances and abductions that have increased recently in the area. Police spokesperson SSP Ranjith Gunasekara said that the situation was calm and no cases of violence reported.
Posted by SRI LANKA TODAY at Monday, October 20, 2008