Sri Lanka's Ajantha Mendis: 'The Emerging player of the year' at ICC awards 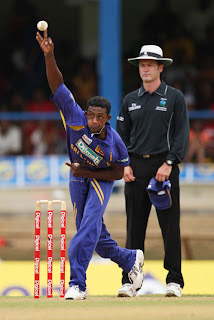 Sri Lanka's Ajantha Mendis: 'The Emerging player of the year' at ICC awards

Sri Lanka's spin sensation 23-year old Ajantha Mendis was named as the emerging player of the year at an awards ceremony held by International Cricket Council (ICC) in Dubai, on Wednesday.

Speaking to media Mendis said “I am delighted to win the award, it is an honour to play for Sri Lanka and I hope to continue playing for my country for a long time to come.”

At the same ceremony, the Sri Lanka cricket team too won the 'Spirit of Cricket' award. It is the second year in a row that Sri Lanka won this award under Mahela Jayawardena's captaincy.

Other winners of the 2008 ICC Awards:

THe quake is reported to have hit at 9.21 am local time off the eastern coast of Hokkaido, Japan's northernmost island at a depth of about 12 miles. A 4-inch tsunami rippled at the shore about 35 minutes after the quake.

Earlier a warning had been issued for a 20-inch tsunami along the eastern coast of Hokkaido and the northeastern coast of Japan's main island of Honshu. The warning was lifted about an hour later.

"There was some light shaking, but it was nothing major," said Yukio Yoshida, a police spokesman in Hokkaido.

Authorities temporarily advised about 10,600 residents of Ofunato in Iwate Prefecture, about 125 miles (200 kilometers) northwest of Tokyo, to evacuate their homes, and ordered people to stay way from beaches throughout the region.
Posted by SRI LANKA TODAY at Thursday, September 11, 2008