Kotalawala granted bail
(Dailly Mirror)
Ceylinco Chairman Lalith Kotalawala was granted bail today by the Colombo Chief Magistrate in the F&G Property Developer’s case. He was ordered to surrender his passport and appear before the CID during the last Sunday of every month.
Kotalawala was earlier given bail in another Ceylinco related case as well but remains in remand in connection with several other cases also related to the Ceylinco group. (TFT
Posted by SRI LANKA TODAY at Friday, October 09, 2009

Ceylinco Chairman Lalith Kotalawala was granted bail today by the Colombo Chief Magistrate in the F&G Property Developer’s case. He was ordered to surrender his passport and appear before the CID during the last Sunday of every month.
Kotalawala was earlier given bail in another Ceylinco related case as well but remains in remand in connection with several other cases also related to the Ceylinco group. (TFT)
Posted by SRI LANKA TODAY at Friday, October 09, 2009 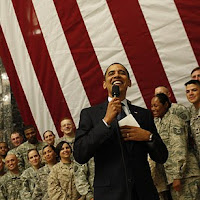 nt Barack Obama won the 2009 Nobel Peace Prize on Friday in a stunning decision designed to encourage his initiatives to reduce nuclear arms, ease tensions with the Muslim world and stress diplomacy and cooperation rather than unilateralism.

Nobel observers were shocked by the unexpected choice so early in the Obama presidency, which began less than two weeks before the Feb. 1 nomination deadline.

White House press secretary Robert Gibbs said Obama woke up to the news a little before 6 a.m. EDT. The White House had no immediate comment on the announcement, which took the administration by surprise.

The Norwegian Nobel Committee lauded the change in global mood wrought by Obama's calls for peace and cooperation but recognized initiatives that have yet to bear fruit: reducing the world stock of nuclear arms, easing American conflicts with Muslim nations and strengthening the U.S. role in combating climate change.

"Only very rarely has a person to the same extent as Obama captured the world's attention and given its people hope for a better future," said Thorbjoern Jagland, chairman of the Nobel Committee.

Still, the U.S. remains at war in Iraq and Afghanistan, the U.S. Congress has yet to pass a law reducing carbon emissions and there has been little significant reduction in global nuclear stockpiles since Obama took office.
"So soon? Too early. He has no contribution so far. He is still at an early stage. He is only beginning to act," said former Polish President Lech Walesa, a 1983 Nobel Peace laureate.

"This is probably an encouragement for him to act. Let's see if he perseveres. Let's give him time to act," Walesa said.
The award appeared to be a slap at President George W. Bush from a committee that harshly criticized Obama's predecessor for his largely unilateral military action in the wake of the Sept. 11 terror attacks. The Nobel committee praised Obama's creation of "a new climate in international politics" and said he had returned multilateral diplomacy and institutions like the U.N. to the center of the world stage.

Archbishop Desmond Tutu of South Africa, who won the prize in 1984, said Obama's award shows great things are expected from him in coming years.

"It's an award coming near the beginning of the first term of office of a relatively young president that anticipates an even greater contribution towards making our world a safer place for all," Tutu said. "It is an award that speaks to the promise of President Obama's message of hope."
Until seconds before the award, speculation had focused on a wide variety of candidates besides Obama: Zimbabwe's Prime Minister Morgan Tsvangirai, a Colombian senator, a Chinese dissident and an Afghan woman's rights activist, among others. The Nobel committee received a record 205 nominations for this year's prize, though it was not immediately apparent who nominated Obama.
"The exciting and important thing about this prize is that it's given to someone ... who has the power to contribute to peace," Norwegian Prime Minister Jens Stoltenberg said.
Obama is the third sitting U.S. president to win the award: President Theodore Roosevelt won in 1906 and President Woodrow Wilson was awarded the prize in 1919.
The Nobel committee chairman said after awarding the 2002 prize to former Democratic President Jimmy Carter, for his mediation in international conflicts, that it should be seen as a "kick in the leg" to the Bush administration's hard line in the buildup to the Iraq war.
Five years later, the committee honored Bush's adversary in the 2000 presidential election, Al Gore, for his campaign to raise awareness about global warming.
Obama was to meet with his top advisers on the Afghan war on Friday to consider a request by Gen. Stanley McChrystal, the U.S. commander in Afghanistan, to send as many as 40,000 more troops to Afghanistan as the U.S war there enters its ninth year.
Obama ordered 21,000 additional troops to Afghanistan earlier this year and has continued the use of unmanned drones for attacks on militants in Afghanistan and Pakistan, a strategy devised by the Bush administration. The attacks often kill or injure civilians living in the area.
In July talks in Moscow, Obama and Russian President Dmitry Medvedev agreed that their negotiators would work out a new limit on delivery vehicles for nuclear warheads of between 500 and 1,100. They also agreed that warhead limits would be reduced from the current range of 1,700-2,200 to as low as 1,500. The United States now as about 2,200 such warheads, compared to about 2,800 for the Russians.
But there has been no word on whether either side has started to act on the reductions.
Former Peace Prize winner Mohamed ElBaradei, director general of the International Atomic Energy Agency in Vienna, said Obama has already provided outstanding leadership in the effort to prevent nuclear proliferation.
"In less than a year in office, he has transformed the way we look at ourselves and the world we live in and rekindled hope for a world at peace with itself," ElBaradei said. "He has shown an unshakeable commitment to diplomacy, mutual respect and dialogue as the best means of resolving conflicts."
Obama also has attempted to restart stalled talks between the Israelis and Palestinians, but just a day after Obama hosted the Israeli and Palestinian leaders in New York, Israeli officials boasted that they had fended off U.S. pressure to halt settlement construction. Moderate Palestinians said they felt undermined by Obama's failure to back up his demand for a freeze.
Nominators for the prize include former laureates; current and former members of the committee and their staff; members of national governments and legislatures; university professors of law, theology, social sciences, history and philosophy; leaders of peace research and foreign affairs institutes; and members of international courts of law.
The Nelson Mandela Foundation welcomed the award on behalf of its founder Nelson Mandela, who shared the 1993 Peace Prize with then-South African President F.W. DeKlerk for their efforts at ending years of apartheid and laying the groundwork for a democratic country.
"We trust that this award will strengthen his commitment, as the leader of the most powerful nation in the world, to continue promoting peace and the eradication of poverty," the foundation said.
In his 1895 will, Alfred Nobel stipulated that the peace prize should go "to the person who shall have done the most or the best work for fraternity between the nations and the abolition or reduction of standing armies and the formation and spreading of peace congresses."
Unlike the other Nobel Prizes, which are awarded by Swedish institutions, he said the peace prize should be given out by a five-member committee elected by the Norwegian Parliament. Sweden and Norway were united under the same crown at the time of Nobel's death.
The committee has taken a wide interpretation of Nobel's guidelines, expanding the prize beyond peace mediation to include efforts to combat poverty, disease and climate change.
___
Associated Press writers Ian MacDougall in Oslo, Celean Jacobson in Johannesburg, George Jahn in Vienna and Monika Scislowska in Warsaw, Poland contributed to this report.