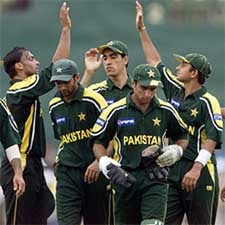 Pakistan beats Sri Lanka by 146 runs in 4th one-day international
Umar Akmal hit a maiden century and Rao Iftikhar Anjum took his first five-wicket haul Friday to lead Pakistan to a 146-run win over Sri Lanka in the fourth one-day international.
It was Pakistan's first win on tour after losing 2-0 in the three-Test series and now trailing 3-1 in the five-match ODI series.
Akmal smashed five boundaries and four sixes to score 102 not out from 72 balls. He put on a record 176-run partnership for the fifth wicket with Pakistan captain Younis Khan (89) as the visitors made 321-5 at R. Prememadasa Stadium.

In reply, Sri Lanka was bundled out for 175 in 36 overs with Iftikhar Anjum taking 5-30 from 8.1 overs.
Younis won the toss and elected to bat first. He combined well with Akmal when Pakistan looked shaky on 130-4, eclipsing the previous best partnership for the fifth wicket between the two sides - 155 between Mohammad Yousuf and Younis in 2002.

Younis played a more calm innings than Akmal, hitting only four boundaries in 111 balls.
Sri Lanka started the chase positively. Mahela Jayawardene, in his new role as opener, hit two fours and a six for a run-a-ball 19 before being caught by Mohammad Aamer off seamer Naved-ul-Hasan to leave the hosts on 36-1 in the sixth over.
Kumar Sangakkara fell for 39 off 33 balls, caught by Imran Nazir off Iftikhar Anjum, to make it 101-2 in the 17th over.
Sri Lanka then lost 8-45 with Upul Tharanga anchoring the innings with 80 off 89 balls, hitting eight fours and a six.
Legspinner Malinga Bandara was the pick of Sri Lanka's bowlers, taking 2-44. While paceman Lasith Malinga conceded an extraordinary 26 wides.
Posted by SRI LANKA TODAY at Saturday, August 08, 2009