Jakarta -
A group of Sri Lankan asylum seekers were to leave an Australian customs ship moored off Indonesia's Bintan island Wednesday after a three-week standoff, the Indonesian Foreign Ministry said. The 56 migrants are the remainder of a group of 78 Sri Lankans who were picked up by the Australian ship Oceanic Viking in international waters one month ago while on their way to Australia, claiming persecution in their homeland.
They were taken to port off Bintan but they refused to disembark, demanding they be sent to Australia.
Last week, 22 migrants agreed to go ashore and enter an Australian-funded refugee centre in Tanjung Pinang on Bintan, after being promised speedy processing for their refugee claims by the UN refugee agency UNHCR, but the others remained adamant in their refusal.
Indonesian Foreign Ministry spokesman Teuku Faizasyah said the 56 Sri Lankans had now agreed to leave the ship.
"A team from related departments have met them and will send them to the detention centre in Tanjung Pinang," Faizasyah said.
"They would be detained for one month after their claims are processed by the UNHCR before they could be sent to a third country willing [to take them in], possibly Australia," he said.

He said the verification process would take a week.
Australia has seen a fresh influx of undocumented migrants from conflict-hit countries such as Afghanistan and Sri Lanka this year.
Most Australia-bound asylum seekers arrive on small boats from Indonesia, where they have paid smugglers to arrange their passage.
Posted by SRI LANKA TODAY at Wednesday, November 18, 2009

This agreement starts a Sri Lankan national space capability by providing an SSTL Earth Observation satellite and commencing the definition and design of Sri Lanka's first communications satellite. Peter Hayes, the British High Commissioner in Sri Lanka recognised the value of the agreement, saying "This project is exciting for the development of telecommunications in Sri Lanka and will strengthen the ties between the two countries."The programme, including a training and development programme and collaborative activities between the University of Surrey and leading Sri Lankan academic institutes, will promote academic, industrial and socio-economic development. The project has been approved by the Sri Lankan government under the personal direction of His Excellency, President Mahinda Rajapaksa.Professor Sir Martin Sweeting, who also chairs the Space Centre of the University of Surrey, said "Sri Lanka has already demonstrated a keen interest in space based technology, supported through numerous programmes within the country's universities and other academic organisations such as the Arthur C. Clarke Institute for Modern Technologies. Our close partnership will allow Sri Lanka to fully embrace the benefits of space technology through training and education while stimulating industrial development. The economic benefits resulting from space based communications including TV, broadband services and earth observation applications are substantial and will positively contribute to the country's development as a "high-tech" trading nation".
More:http://media-newswire.com/release_1106185.html
Posted by SRI LANKA TODAY at Wednesday, November 18, 2009

At this occasion the two Commanders exchanged souvenirs. The Pakistani Air Force Commander also met with the Air Force Chief of Staff as well as other senior Air Force officers. 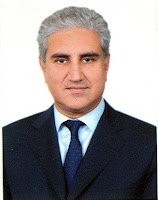 Foreign Minister Makhdoom Shah Mehmood Qureshi on Sunday urged India to overcome its domestic political pressure and resume composite dialogue process with Pakistan as time is running out.In an interview with Dunya News he said, the message has already been conveyed to India that delay in the resumption of bilateral dialogue process could change the situation in Pakistan.He said that if India is not ready to talk, then Pakistan should not press for the talks.

Fortunately enough a significant number of Indians are convinced that the dream of making India an economic power could not be materialised without settling issues with Pakistan, he said.

Responding to another question he said Indeed, there is a significant constituency of peace preachers both in Pakistan and India.
Posted by SRI LANKA TODAY at Wednesday, November 18, 2009

Serious efforts on part of India needed for resumption of dialogue: FO Spokesman

Serious efforts on part of India needed for resumption of dialogue: Foriegn Office Spokesman in Pakistan

Foreign Office Spokesman Abdul Basit said on Friday that India is not serious in resumption of dialogue, on different bilateral issues including Kashmir. Talking to PTV, he said that Prime Minsters of both countries had agreed at a summit in Egypt that terrorist acts, would not affect the negotiations between India and Pakistan in future. The Spokesman said that Pakistan has no link with Bombay incident, istead its agencies made efforts to collect all related facts about that incident.To a question, he said that Pakistan has not got good signals from India, and there was contradiction, between statements of Indian Prime Minster and the Minister.Foreign Office Spokesman said Pakistan does not believe in anybackground diplomacy, and there was need of sincerity and seriousness for settlement of all issues including Kashmir dispute.
Posted by SRI LANKA TODAY at Wednesday, November 18, 2009