SAARC calls for 'strongest cooperation' to wage war on terror
The 15th SAARC summit ended in Colombo on Sunday with calls by its eight member states to step up “strongest possible cooperation” against terrorism as well as to urgently develop regional hydro potential, grid connectivity and gas pipelines for energy security.
A declaration adopted by the South Asian Association for Regional Cooperation (SAARC) at the end of a two-day summit also warned that rising oil prices were threatening the hugely populous region's energy security as well as economic growth.
“They (SAARC leaders) stressed the urgent need to develop the regional hydro potential, grid connectivity and gas pipelines,” it said. “They noted that the possibility of evolving an appropriate regional inter-governmental framework may be explored to facilitate such endeavour.”
The declaration was unanimously approved by Prime Minister Manmohan Singh and other South Asian leaders at the closing event at the Bandaranaike Memorial International Convention Hall.
The two-day event, which virtually shut down Colombo for three days, brought together Presidents Hamid Karzai of Afghanistan, Mahinda Rajapaksa of Sri Lanka and Maumoon Abdul Gayoom of the Maldives, Prime Ministers GP Koirala of Nepal, Jigmey Thinley of Bhutan and Yousaf Raza Gilani of Pakistan as well as Fakruddin Ahmed, chief advisor of the caretaker Bangladesh government.
As reflected in the speeches by SAARC leaders Saturday, the declaration placed great emphasis on the need to fight terrorism. It condemned “all forms of terrorist violence” and expressed deep concern over the “serious threat posed by terrorism to the region”.
The SAARC leaders reiterated their commitment to strengthening the legal regime against terrorism, including by undertaking to implement all international conventions relating to combating terrorism.
“They emphasized the need for strongest possible cooperation in the fight against terrorism and transnational organized crime.”
The declaration observed that an effective and economic regional tele-communication regime “is an essential factor of connectivity, encouraging the growth of people-centric partnerships”.
It also called for a uniformly applicable low tariff for international direct dial calls within South Asia.
The next meeting of the SAARC summit is scheduled to be held in the Maldives. The Maldives was to have hosted the 15th summit but backed off at the eleventh hour, enabling Sri Lanka to play the host.
Read 15th SAARC DECLARATION http://www.news.lk/index.php?option=com_content&task=view&id=6621&Itemid=44
Posted by SRI LANKA TODAY at Sunday, August 03, 2008 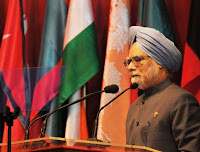 egional Cooperation summit (SARRC) on Saturday(02) in Colombo Sri Lanka."Terrorists and extremists don't know borders. We must act with determination to fight terrorism. We cannot lose the battle against ideologies of hatred," said Dr Singh.Dr Singh urged the SAARC countries to jointly act and battle the scourge with determination. "Terrorism continues to rear its ugly head," Singh said.

Terrorism was high on the agenda of the two-day summit being attended by Pakistan Prime Minister Yousuf Raza Gilani and leaders from Sri Lanka , Bangladesh, Nepal, Bhutan, Maldives and Afghanistan.
Dr Singh is scheduled to meet Gilani to convey India's concerns over the Inter Services Intelligence links in the suicide bomb attack on Indian embassy in Kabul as also the recent ceasefire violations by the Pakistani forces along the Line of Control in Jammu and Kashmir.
Indian prime Minister Dr. Manmohan Singh full speach readhttp://www.news.lk/index.php?option=com_content&task=view&id=6610&Itemid=44
Posted by SRI LANKA TODAY at Sunday, August 03, 2008 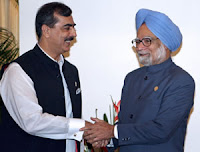 India Foreign Secretary Shivshankar Menon said that during their meeting, “both prime ministers [Singh and Gilani] said we need to overcome (problems) and move forward”. He told reporters that Gilani had agreed to probe charges that Pakistani intelligence was behind the embassy suicide attack, AFP reported.Exchange: During their meeting, Gilani and Singh exchanged views on various issues, including the Indo-Pak composite dialogue, bilateral relations, trade and security.Following the meeting, which focused mostly on the Indian embassy bombing in Kabul, representatives of both countries provided their views.Gilani agreed to conduct an independent inquiry about Pakistani intelligence aiding the embassy attack, Indian Foreign Minister Pranab Mukherjee told media. This contradicted Gilani’s statement that the Indian premier had said that Pakistan had not been blamed for the attack.Meeting: Gilani also told reporters he would discuss the Indian embassy attack with Karzai on Sunday. “If they give me evidence, then we will look into the matter,” he added. The premier said he was meeting with both Singh and Karzai because Pakistan wants cordial relations with neighbors.
Posted by SRI LANKA TODAY at Sunday, August 03, 2008 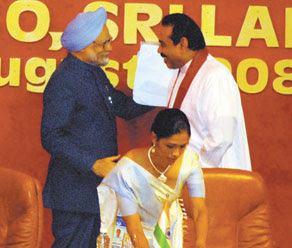 President Mahinda Rajapaksa in animated conversation with Indian Prime Minister Dr. Manmohan Singh after taking over the mantle of Chairmanship from the Indian leader during yesterday’s 15th SAARC Summit in Colombo. (Pic by Srilal Gomes)
Posted by SRI LANKA TODAY at Sunday, August 03, 2008 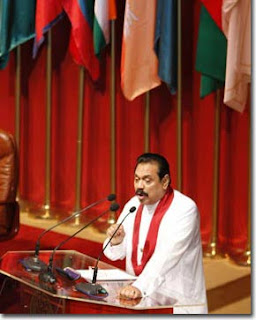 President Mahinda Percival Rajapakse delivers the opening speech at the 15th summit of the South Asian Association for Regional Cooperation (SAARC) at the BMICH in Colombo Saturday. Pic by Gemunu Wellage 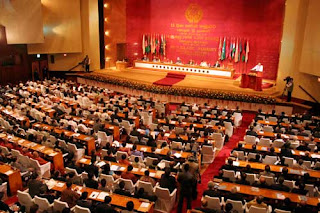 President Mahinda Rajapaksa, addressing the opening session of the 15th SAARC Summit this morning (August 2) at the Bandaranaike Memorial International Conference Hall, called on the South Asian leaders attending the summit to commit themselves and their countries to a more determined and concerted effort to collectively combat the scourge of terrorism in all its forms and manifestation. He emphasized that it is the very interdependence which gave
birth to SAARC that has emerged as the crucial factor for durable peace and the protection of democratic values in the region.
In this regard, President Rajapaksa expressed the need to ensure strengthening regional legal mechanisms and intensifying intelligence sharing, in order to secure the region’s collective prosperity, peace and stability, in combating terrorism. He said it is also necessary that South Asia as a region, endeavour to set right the many wrong impressions that exist, or are promoted elsewhere, about the actions that are imperative to protect our people and societies from the brutalities of terrorism. Terrorism anywhere is terrorism and there are no good terrorists or bad terrorists, he emphasized.
Read full speach http://www.news.lk/index.php?option=com_content&task=view&id=6606&Itemid=44
Posted by SRI LANKA TODAY at Sunday, August 03, 2008 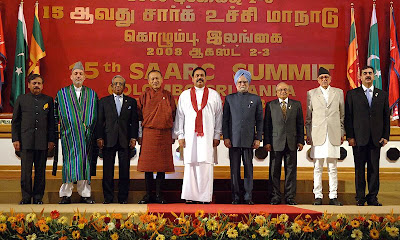 The Summit got underway with President Mahinda Rajapaksa who assumed the chairmanship of the eight nation grouping, exhorting the need for greater economic cooperation, which would help empower the vast majority of the regions 1.5 billion people who live in poverty.
Describing terrorism as "terrorism", where ever it may be, Rajapaksa thanked SAARC member countries for helping Sri Lanka combat the scourge of terror.
Posted by SRI LANKA TODAY at Sunday, August 03, 2008