The Pakistani Philosopher, Sage, and the Great poet, Dr. Allama Iqbal is a living legend in the minds of the people even-though he is no more, Sri Lanka Muslim Congress (SLMC) Leader and Minister of Justice, Rauff Hakeem observed.  Minister Hakeem noted that Dr Allama Iqbal is a visionary in his day who foreseen the creation of Pakistan for the Muslim community which suffered enough under the colonial subjugation. Hakeem described Allama Iqbal as the philosopher of the 19th century.
The messages of the fame and yeoman service rendered by Dr. Allama Iqbal has reached even the tiny hamlets in Sri Lanka. Minister Hakeem said naming a village on Kantale Muttur road as Iqbal Nagar and another village as Asath Nagar is testimony to his legacy. Several books of Allama Iqbal have been translated in to various languages, Minister Hakeem added.  Addressing the Allama Iqbal day celebrations and the prize giving ceremony of Pakistan Essay Competition organized by the Pakistan - Sri Lanka Friendship Association, he said in today’s context Muslims need to get the trust of the majority community. Hence the thoughts of Allama guide us in this regards he further added.
Mr. Hakim who took part in the deliberations as the Chief Guest has further noted that, Dr. Allama Iqbal’s fame remains among the Muslims who live in countries such as India, Sri Lanka and Malaysia. In his poems he expressed the needs of the Muslims. In today’s context Muslims need to get the trust of the majority community. Hence the thoughts of Allama provide guidance in this regards he further added.
The winners of the Pakistan Essay competition received SL Rs. 10,000, Rs. 6000, and Rs 4000 as 1st, 2nd and 3rd positions respectively. These prizes were given to the successful winners in each of the categories of English, Sinhala and Tamil languages.
Addressing the event the Attorney General Mohan Peiris said that at the very outset Iqbal showed a remarkable leaning towards philosophy that had caught the attention of his teacher, Sir Arnold who took him to Cambridge University for higher education. Later went to Munich University in Germany from where he earned a PhD for his work on metaphysics.  Iqbal was an awakener of humanity. His message is universal and to the entire humanity. His rank among the immortals of history is unquestionable.  He holds the same place in the line of the world's greatest poets as has been held by Homer, Jalaludeen Rumi, Dante, Shakespeare, Milton and Goethe. The poet of Iqbal is a contribution to human thought and an embodiment of definite mission that is noble innovating.
While speaking on the occasion the Counsellor of Pakistani High Commission, Kaiser Chaudhary said that Allama Iqbal the academician, politician, lawyer, social reformer and a thinker, stressed the integrity not only in the country but also with every nation in the world.  Iqbal’s message of ‘Khudi’ (self actualization), ‘Mard – e - Momen; (The true Muslim) and Shaheen (The Eagle) Is so deep that each and every sense require lot of deliberation to understand the real meanings. But Iqbal’s message is not for the Muslims only. His vision about democracy, his message to the youth, his advice for national integration and his messages on many other aspects of life are for all the people and all the nations. He was not only a philosopher but also a politician and a social activist. He played conspicuous service not only to literacy but also to politics, he added.
Posted by SRI LANKA TODAY at Friday, December 24, 2010

(30.11.2010)       US $ 250 m export credit line to :Anjana Samarasinghe and Charumini de SilvaThe Trade between and is to reach US $ 0.5 billion within the next five years. President Asif Ali Zardari addressing the - Pakistan Business Forum 2010 yesterday said the two countries have had a good relationship as good friends and partners in the region.
“With the restoration of peace; the sky is the limit for . This is a unique situation for to recover. will recover gradually and will sincerely assist ,” he said.

He also called for a barter trade with rather than depending on dollar-denominated trade.
Posted by SRI LANKA TODAY at Friday, December 24, 2010

and signed four agreements yesterday to enhance trade and investments between the two countries.  The Agreements were signed in the presence of President Mahinda Rajapaksa and the visiting Pakistani President Mr. Asif Ali Zardari.  These agreements cover Visa abolition for holders of Diplomatic and Official Passports, Memorandum of Understanding on Agricultural Cooperation, Agreement on Cooperation and Mutual Administrative Assistance in Customs Matters, and Agreement on Cooperation in the field of Arts and Creative Studies between National College of Arts  of and and Performing Arts of Sri Lanka.

The signing of agreements was preceded by bilateral talks between the Sri Lankan and Pakistani delegations which focused on increasing trade and investment between the two countries, and cooperation in fields such as defence, agriculture, health and education.
President Rajapaksa stated that it was a good omen that the Pakistani President was the first state leader to visit after the swearing in of his second term of office. He expressed his appreciation for the support given by during 's war against terrorism.
President Rajapaksa also stated that he hoped would recover soon from the devastation caused by floods and come out stronger. He noted that the two countries have common positions on many matters at regional and multilateral forums and relations can be strengthened through the - Pakistan Parliamentarians' Friendship Association
Pakistani President responded stating that he can feel 's pain as he too is a victim of terrorism. The Pakistani President recalled the unfortunate incident the cricket team had to face in and said that culprits have been punished. The Pakistani President also stated that he has instructed relevant authorities to resume Pakistan International Airline flights to and is discussing the establishment of a branch of the Pakistan National Bank in . He added that looks forward to being a foremost tourist destination in the world.
The Sri Lankan delegation included Ministers Prof. G. L. Peiris, Dr. Sarath Amunugama, Bandula Gunawardena, T B Ekanayake, A H M Fowzie, Basil Rajapaksa, Mahinda Yapa Abeywardena, Defence Secretary Gotabaya Rajapaksa, Secretary to the President Lalith Weerathunge, Central Bank Governor Ajith Nivard Cabraal, Treasury Secretary P B Jayasundara and other officials.
The Pakistani delegation included the Minister of Defence, C H Ahmad Mukhar, Minister of Foreign Affairs, Makhdoom Qureshi, Minister of Finance/ Sindh Provicne Sayed Murad Ali Shah, High Commissioner of Pakistan to Sri Lanka Ms. Seema Baloch, Military Secretary to the President Brig. Syed Muhammad Adnan and other government and High Commission officials.
Posted by SRI LANKA TODAY at Friday, December 24, 2010

Pakistan President Asif Ali Sardari arrived in Sri Lanka this evening in a special flight on a four-day official visit from November 27-30. 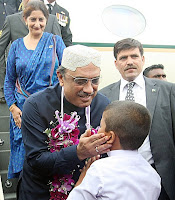 
A Credit Agreement for USD 416 million for the construction of the Northern Railway line was signed between India and Sri Lanka .
This was signed in the presence of President Mahinda Rajapaksa and India's Minister of External Affairs, S M Krishna who arrived Thursday evening on a three day oficial visit to Sri Lanka. During the visit of Indian Minister two Indian consulates will be opened in Hambantota and Jaffna today and tomorrow respectively while a plaque with regard to
the Northern Railway is to be unveiled tomorrow. The ground breaking ceremony for the housing project will also take place in Ariyalai tomorrow.

The Managing Director of Exim Bank of India, Mr. Nadeem Panjetan signed the agreement for the Indian side while the Treasury Secretary P B Jayasundara signed for the Sri Lankan side.

The construction of the railway line will be carried out in three segments, from Madhu to Talaimannar, Madawachchiya to Madhu and Omantai to Palaly.

In addition, letters were exchanged between Treasury Secretary P B Jayasundara and the Indian High Commissioner, Ashok Kantha for the first phase of the 50,000 housing project for the IDPs funded by India, after the meeting between the President and the Indian Minister.

Initially 1000 houses will be constructed in a cluster format on land given by the Sri Lanka government.

The meeting between President Rajapaksa and the Indian External Affairs Minister was cordial and friendly where Minister Krishna felicitated the President on his assumption of duties for the second term.

It was decided that Kapilawasthu relics will be brought from India to Sri Lanka next May for the 2600 Sambudda Jayanthi celebrations.

The discussion was mainly based on the follow up of the Joint Declaration between India and Sri Lanka when President  Mahinda Rajapaksa visited India in June this year, which the Indian Minister termed as a landmark visit.

The President informed the Indian External Affairs Minister about the resettlement of IDPs which is progressing rapidly.

visit of the Chairman Senate Mr. Farooq Hamid Naek and Mr. Saleem Mandaviwalla, Chairman BOI to where they participated in the swearing in ceremony

Visit of the Chairman Senate Mr. Farooq Hamid Naek and Mr. Saleem Mandaviwalla, Chairman BOI to where they participated in the swearing in ceremony 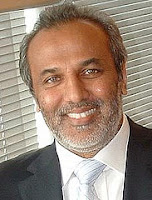 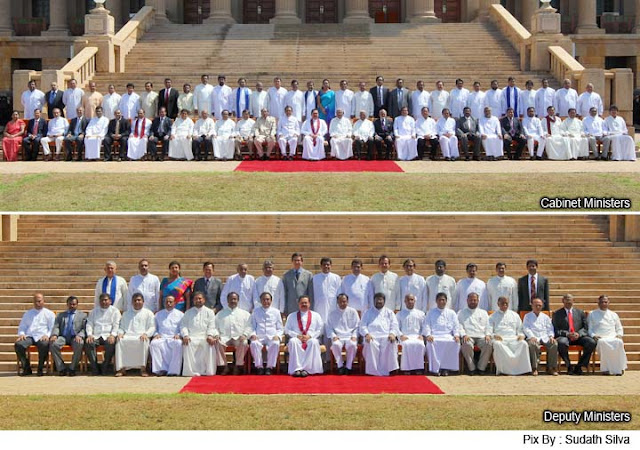