Sri Lankan Airlines’ 52nd destination will be the Russian Capital when it commences a new service to Moscow on 16th September 2011.It will commence operations via Dubai initially with two flights per week on Thursdays and Saturdays. "We are delighted to announce the launch of services to Moscow. This will be the first time in history that our national carrier has served Russia, and will no doubt serve to strengthen the close relationship between our two nations, to a great extent" said  SriLankan Airlines Chairman Nishantha Wickremasinghe,

Sri Lankan Airlines launched services to Shanghai in July 2010, Guangzhou in January and Kochi in March expanding its services steadily over the past several months.

Tourism in Sri Lanka has been booming since 2009 after the dawn of peace in the country.  Accordingly, tourist arrivals from Russia grew from 21% in the first quarter of 2010 and by 22% from other countries in Eastern Europe.

Now Asia is fast becoming an attractive destination for travelers from Russia, the world's fastest growing outbound tourist market.  The World Tourism & Travel Council data shows that Russia is well placed to become one of the world's travel and tourism powerhouses by 2016.
Posted by SRI LANKA TODAY at Thursday, May 12, 2011

sun shines in the eastern German

A hot-air balloon moves through the sky as the sun shines in the eastern German city of Dresden on May 8, 2011 as temperatures rose to a summerly 24 degrees centigrade in most parts of the country. AFP
Posted by SRI LANKA TODAY at Thursday, May 12, 2011

Women in Green honored at Reception  hosted by High Commission of Pakistan
The High Commission of Pakistan in Colombo hosted the visiting Pakistani National Women Cricket Team along with their team officials at a reception today.
The Pakistan National Women Cricket Team is in Sri Lanka to take part in the 2011 Quadrangular Tournament in which besides the host Srilankan team, The Netherlands and Ireland are participating. On Sunday after beating Netherlands in Colombo, Pakistan Women Cricket Team has won the four nation tournament. The One Day International format of the Quadrangular Series will be starting from 26th April 2011. 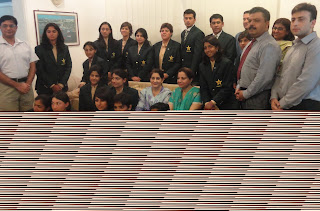 The reception was attended by the High Commissioner of Pakistan Mrs Seema Ilahi Baloch, and the officials from the Pakistan High Commission Colombo.
The touring team was introduced to the guests by the High Commissioner. The Women in green led by the captain Sana Mir and her team met the distinguished guests drawn from the selected invitees.
The High Commissioner of Pakistan H.E Seema Ilahi Baloch in her speech congratulated the team captain and other members of the team for their success in the T20 segment of the Quadrangular series. She said she really feels proud to be in the company of the famous daughters of Pakistan. The High Commissioner conveyed her best wishes to the team for their success in the upcoming One Day International format of the Quadrangular Series in Colombo starting from 26th April 2011.
In 2010 , the Pakistan’s National Women Cricket Team Won gold medal in Asian Games 2010 in Guangzhou, China after beating Bangladesh by 10-wicket in the final of the inaugural women's cricket tournament.
The game of cricket is a passion in many South Asian countries and therefore both Pakistan and Sri Lanka are no exceptions. In recent years the game has attained new heights in both the countries. The deep love of the people for the game of cricket in the two countries is unfathomable. They treat the game more as a way of expressing their respective national pride and consciousness.
Both Sri Lanka and Pakistan enjoy a deep bond of cordial friendship and understanding which is mirrored in various walks of life. Apart from their deep mutual supportive relationship and sharing many common values, the populations in both the countries are also locked in a deep rooted friendship which inter alia originates from the game of cricket. Both the nations firmly believes that the cricket is a not only a strong component which can be a harbinger for promoting peace and harmony in the region but also a great catalyst for bringing the people more closer.
Posted by SRI LANKA TODAY at Tuesday, May 03, 2011