67th. Anniversary of the Communist Party of Sri Lanka held in Jaffna on 10th. July, 2010

67th. Anniversary of the Communist Party of Sri Lanka held in Jaffna on 10th. July, 2010

Reported  by  Chandana  Wijekoon  from  Jaffna


he 67th. Birth Day of our Party – Communist Party of Sri Lanka falls on July 3rd. 2010. To mark this event we decided to hold this Anniversary Meeting today in Jaffna.

At the outset, I take this opportunity to remember with deep respect and honour the founding leaders of our Party, namely Dr. S.A. Wickremasinghe, Pieter Keuneman, Rev. Udakendawala Sri Saranankara, T. Duraisingham, A. Vaidyalingam and, P. Kandiah etc. 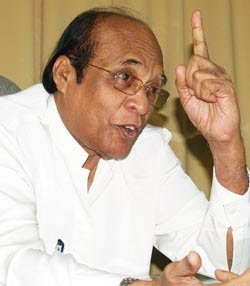 It is also with deep respect that I wish to recall the pleasant memories of Comrades S. Jeyasingham, N. Shanmugathasan, A. Ariyaratne, V. Ponnambalam, M. Karthigesu, P. Kumaraswami, C. Kumaraswami, S.P. Nararajah, M.C. Subramaniam, and S.Wijayananthan. The distinguished members of our Party from the North who nourished and built our Party . There are so many others from the North who were associated with the Left Movement.
Today we are back in politics in the North with sad memories of the past but with full of optimism of our future. I do not propose to recollect that painful and miserable past during this healing and reconciliation period.

Although, our Party was formed 67 years back, its origin goes as far back as 1920s, the historic days of the Jaffna Students Congress, later Jaffna Youth Congress led by Handy Perimpanayagam. The birth of All-Ceylon Youth Congress in 1931 and the Sooriyamal Movement in 1933 and the L.S.S.P. in 1935 were further developments of the anti-Imperialist struggle.

Today we are here in the midst of our comrades and friends after a lapse of over 30 years – we were here last in the year 1976 when we put forward our candidate V.Ponnambalam at the by-election for KKS Seat. Much water has flowed under the bridges of our rivers and I do not propose to recollect those painful and dreadful days of the past during this healing and reconciliation period. No one can be happy over what had happened during this dark period. The loss of precious lives, destruction to the property, the economic ruin, prolonged suffering especially to the lower segments the Tamil society, emergence of cult of violence, collapse of national unity, emergence of under-world were all products and by-products of the war.

I do not want to be disrespectful to the departed leaders of any community who guided the destinies of our nation. I do not want to unearth those unfortunate events. But, they are facts of history which we cannot forget even though we can forgive. It is necessary to draw necessary lessons from this history if we are re-emerge from catastrophe and move forward.

We have missed so many opportunities offered by history and let us be determined that we shall not miss, yet again this golden opportunity.

Absence of a national consensus has been the main cause of our failures in the past and even today.

As far as our Party is concerned, we identified the national question from the very inception of our Party. In fact, the concept of regional autonomy within a united Sri Lankla (i.e. devolution of power in day’s context) was introduced to the Country by our Party as early as 1944 based on a scientific analysis of socio-economic-cultural realities and also international experiences.

The ruling bourgeoisie parties since Independence failed to comprehend these realities and were carried away by petty-narrow political interests and privileges – They abdicated their historical responsibility in the task of nation-building.
It was so in the case of bourgeoisie Tamil leaders in the North – Tamil Congress and Federal Party. They played a conservative and at times reactionary role in the realm of politics, prioriting their tasks to their narrow class interests.
They opposed every thing progressive and radical – Paddy Land Act, Nationalization of foreign interests, nationalization of Transport, Port, some even went to the extent of supporting the disenfranchment of workers of Indian Origin and their citizenship rights. Naturally, they were identified with the reactionary politics. That is how they were distanced from the progressive forces and even from people in the South.

As you all know, the events of Black July of 1983, and the subsequent notorious amendment to the 1978 Constitution (4th. Amendment) brought about a change in the political leadership of the Tamil people from the Tamil bourgeoisie to the right-wing petty bourgeoisie in 1980s. This was the turning point of history followed with a policy of blood and iron-chauvinism, terrorism, and separatism. The right-wing petty bourgeoisie sought refuge in support of reactionary forces abroad.

We of the Communist Party and of course the L.S.S.P stood firmly by our political positions in support of the legitimate rights and aspirations of the Tamil people. We suffered defeat, set-backs in the political front. We were targets of attack from both the terrorists in the North and the chauvinists in the South.

The left-wing political parties in the North who opted for national unity, a democratic path of development, for a political solution within the framework of unity were all marginalized, eliminated or destroyed. Even the moderate bourgeoisie Tamil leaders were not spared.
Even we who gave support for the 13th. Amendment were not spared both by the terrorists in the North and the chauvinists in the South.

I must reveal and reiterate the fact that the Communist Party lost 48 of its leaders at the hands of the J.V.P. and six at the hands of L.T.T.E.
Amazing and mysterious fact of history during the course of the last 30 years is that the L.T.T.E. did not touch the J.V.P. or J.H.U. despite their venomous anti-Tamil and anti-Indian and anti-L.T.T.E. political positions.

Of course, history provides enormous evidence to the effect that the extremists of either side always nourish and nurture each other for their mutual existence and survival.
Both in the North and the South, the chauvinists and extremists survived, thrived, and flourished at the expense of the Left movement and progressive forces. The country thereby lost its balance, and sense of direction and an era of violence and destruction dawned.

Our Party never embraced terrorism or violence as a means of capturing power. Our hands are not stained with blood. Our Party has always been patriotic as well as internationalist.
During the 67 years of our Party’s existence we have contributed much, in many ways for the cause of our people. Above all, we have enriched the social thinking of our people. We have made our people more enlightened, removing from their minds and thoughts, casteism, mysterious beliefs and obscurantism etc, We are proud of our contribution for all those rights of the people – political, economic, and social – that have been achieved through struggles of the Left Movement.

Now is the time for the progressive forces both in the North and the South to work together in the brooder interests of our Country and our people.
I wish to take this opportunity to apprise you of positive and inspiring developments in the international arena.

With the collapse of the Berlin Wall and subsequently of the Soviet Union, many bourgeoisie leaders predicted the end of socialism and the eternal existence of capitalism.

Within 20 years, the face of the world has changed again and continues to change profoundly.
The citadels of world capitalism, U.S. and Western Europe are collapsing, faster than we expected.

The continent of Asia is leading the world economy – with two giants, China and India emerging.

The reawakening of Latin America with 13 Left-wing Governments has altered the political map of Latin America, thus isolating the United States.
The democratization of Africa, has set in. Bridges are being built between China – Africa, Latin America – Africa, Middle East - Africa, Asia – Euro Asia, Russia – China – India. New economic centres, Brazil, Indonesia, South Africa, and Argentina are emerging.
Power of the omnipotent Dollar is weakening. 75% of the world’s foreign exchange reserves today belong to the developing countries. One third of the world’s foreign exchange reserve is owned by China.
These are the new realities of the world developments – This is why the Western Powers could not have their own way and their own say on matters relating to Sri Lanka. This is what Prabhakaran failed to comprehend.
The world’s Left Movement has revived. Today, there is globalization of Left and Progressive forces, the world over.

So, the international and national political environment is becoming favourable to us. This is the time for the progressive and democratic forces in the North and the South to work together.

This is the message of the Communist Party of Sri Lanka to the people of the North on its 67th. Anniversary.