cess with India leading to peaceful settlement of all outstanding issues, especially Jammu and Kashmir. Responding to questions at the weekly briefing this afternoon, Foreign Office spokesman Abdul Basit said, “Pakistan wants resumption of dialogue as quickly as possible as this is necessary to resolve issues facing the two countries and the region.”

About reports that the United States has asked India to resume dialogue with Pakistan, the spokesman said any help for resumption of dialogue is encouraging.

He told a questioner that both President Asif Ali Zardari and Indian Prime Minister Dr. Manmohan Singh would be attending the Shanghai Cooperation Organization 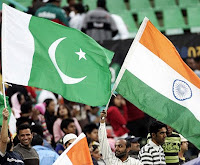 summit in Russia but there is no meeting planned between the two leaders.

To a question he said Mumbai attacks were reprehensible and Pakistan is sparing no efforts to bring perpetrators of the crime to book.

He said Pakistan wished that instead of providing piecemeal information India should have provided all information in one go.

The spokesman said even the latest information received on 20th of last month is in languages other than Urdu and English.

Pakistan has received a part of the document in English and translation of the remaining part is still awaited.

Replying to another question the spokesman said out of 543 million dollars pledged in response to the UN appeal, the world body has so far received about 24 percent of the amount which has been spent on relief activities for IDPs of Swat. 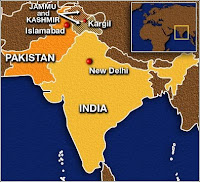 them to release the pledged amount without any delay so that there is no disruption in relief activities.

The spokesman said on the sidelines of the SCO summit President Asif Ali Zardari will have bilateral meetings with his Russian counterpart and other leaders. There will also be a trilateral meeting of the Presidents of Pakistan, Afghanistan and Russia to take stock of the regional situation.

To a question he said one of the students who were earlier detained in UK has returned home on his own accord and Pakistan is providing legal assistance to others who wanted to stay there and pursue their studies.

Replying to another question he hoped that now that the composition of the Commission assigned to probe assassination of Mohtarma Benazir Bhutto has been completed it would visit Pakistan soon.
Posted by SRI LANKA TODAY at Wednesday, June 17, 2009

Economic expansion in war-battered Sri Lanka fell to 1.5 percent during the first quarter of this year, as the global recession hurt exports, official data showed Wednesday.
The slowdown contrasted with 6.2 percent growth in the first quarter of 2008, though hopes of long-term development have risen since the government's defeat of Tamil rebels last month after decades of conflict.
"The global turmoil has directly or indirectly affected the local economy," the head of the government's statistics office Suranjana Vidyaratne said.
The growth rate was the lowest in Sri Lanka since 2003, with the industries sector, which includes key shipments of garments, growing by only 1.9 percent against 6.0 percent in the same period in 2008.

Service industries, which include telecom, banking and shipping, grew by 1.0 percent compared with 6.4 percent in the same quarter last year.
Agriculture, focused on exports of tea and rubber, grew by a modest three percent, against 5.9 percent 12 months earlier.
Following the Tamil Tigers' defeat, the Central Bank of Sri Lanka plans to revise the island's economic forecast for 2009 up to between four and five percent, from 2.5 percent to 3.0 percent announced earlier this year.
The end of the war should draw investors into construction and other infrastructure sectors, analysts say.
"When the northern reconstruction comes on stream later this year, that will add a significant impact on the economy. Things will take off," said Chinthaka Ranasinghe, head of research at John Keells Stockbrokers.
Posted by SRI LANKA TODAY at Wednesday, June 17, 2009

Displacement in Pakistan has contributed to a new rise in numbers
A slight drop in the number of people uprooted around the world in 2008 has been more than offset by recent crises in Pakistan and Sri Lanka, th 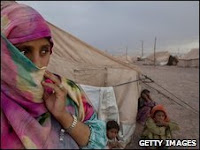 e UN says.
The UN refugee agency, UNHCR, said global displacement stood at 42 million at the end of last year.
Of these, 16 million are refugees and asylum seekers and 26 million internally displaced people.
There are 5.7 million refugees "living in limbo", with little prospect of immediate solutions, UNHCR said.

Click to see a map of the world's displaced people
This includes 29 separate groups of 25,000 or more refugees in 22 states who have been displaced for five or more years, the agency said in its annual report.
Posted by SRI LANKA TODAY at Wednesday, June 17, 2009 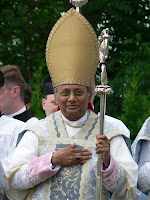 Pope Benedict XVI has appointed Archbishop Albert Malcolm Ranjith Patabendige Don -one of his most trusted collaborators in the Vatican and a forceful advocate for justice and peace- to head the archdiocese of Colombo in Sri Lanka.Archbishop Albert Malcolm Ranjith Patabendige DonA strong leader, he returns as head of the Sri Lankan Church in what many observers see as a particularly difficult moment. A bloody 25-year civil war has just ended with the military defeat of the Tamil Tigers rebels but which has raised many questions about the conduct of the final phase of the war and, more importantly, has not resolved the root causes of that conflict.One of only two Asians in top positions in the Roman Curia the other being Indian Cardinal Ivan Dias, prefect of the Congregation for the Evangelization of the Peoples he succeeds Archbishop Oswald Gomis, who reached the official retirement age of 75 over 18 months ago.

The Vatican made the announcement on June 16, confirming rumors that have circulated in Rome for almost a year.The Pope has appointed the American Dominican, Father Joseph Augustine ("Gus") Di Noia to succeed Archbishop Ranjith as Secretary of the Congregation for Divine Worship and the Discipline of the Sacraments and has promoted him to the rank of archbishop. Father Di Noia is well known to the Pope as they worked together in the Congregation for the Doctrine of the Faith, when the future Pope was head of that Vatican office and the Dominican priest was under-secretary.

First Swine Flu case in Sri lankaThe first person diagnosed with Swine Flu has been found in the country, said He

althcare and Nutrition Minister Nimal Siripala de Silva yesterday evening at a hurriedly convened press conference held at the Health Ministry in Colombo.The patient detected from Wattala is an eight-year old boy who has arrived from Australia to attend a wedding function. He had come with his father last Sunday, June 14.A (H1N1) virusSwine influenza (swine flu, hog flu and pig flu) is an infection of a host animal by any one of several specific types of microscopic organisms called swine influenza virus.The 2009 outbreak flu outbreak is due to a new strain of subtype H1N1 not previously reported in pigs. The strain can be transmitted from human to human. The influenza is quite common in pigs. Direct transmission of swine flu from pigs to humans is occasionally possible.The influenza A (H1N1) virus was first detected in Mexico in late April. It has infected 36,000 people in 76 countries and claimed 163 lives according to latest WHO figures.As the boy was suffering from high fever and cough the parents have informed the Australian High Commission in Colombo, which later informed the Epidemiology Unit of the Health Ministry.The boy was thereafter admitted to the Infectious Diseases Hospital at Angoda, where he is receiving treatment at present.The Minister requested the public not to panic as all necessary medicines to treat Swine Flu is available in the country and the Ministry was prepared for any eventuality. The Government has already drawn plans to contain the spreading of Swine Flu, he added.
Posted by SRI LANKA TODAY at Wednesday, June 17, 2009