Chaminda Vaas moments ago became only the fourth person in ODI history to pass the 400 wicket mark during the 4th ODI against India in Colombo. Yuvraj Sign became his 400th scalp edging one to short midwicket. Murali is second highest ODI wicket taker with 314 wickets to his name.

Most wickets in career

I will retire soon - Susanthika

I will retire soon - Susanthika
Upon returning to the country today morning from the Beijing Olympics sprinter Susanthika Jayasinghe stated that she would retire from athletics very soon.
Posted by SRI LANKA TODAY at Wednesday, August 27, 2008

No hurry for snap poll-President

No hurry for snap poll-President

President Mahinda Rajapaksha declared that he was not hurry to hold a snap general election as the mandate he had received was valid
up year 2010
Posted by SRI LANKA TODAY at Wednesday, August 27, 2008 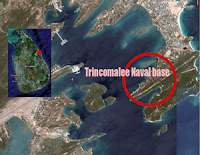 According to Navy sources , the navy base was alarmed on an approaching terror aircraft by Sri Lanka Air Force around 9 PM. After few minutes, naval troops detected the aircraft and engaged it with anti air guns . The machine gun fire caused the aircraft to make away without entering into the naval dockyard, said the sources.

However, the terrorists managed to drop two improvised bombs into the navy camp. The sources said that only one out of two bombs was exploded. 10 sailors suffered injuries due to the explosion.

A multi-religious, cross-cultural historical Museum for Sri Lanka in Kataragama

A multi-religious, cross-cultural historical Museum for Sri Lanka in Kataragama

sland's first museum depicting beliefs and cultural strains of all religious faiths represented in Sri Lanka will be ceremoniously opened tomorrow (28),by His Excellency the President Mahinda Rajapaksa in Kataragama

.The Museum is housed in the Kataragama Devalaya premises and built at a cost of Rs 65million with financial assistance from the Netherlands.Central Cultural Fund sources say that very rare pieces of cultural value will be on display here. Since many devotees and local and foreign tourists visit the sacred premises at night the CCF intends to keep the Museum open at night in the interest of such visitors.

It was the wish of President Mahinda Rajapakse to encourage the commerce of cultural interest between the South and the East, and this was a major stimulus for the project.
Posted by SRI LANKA TODAY at Wednesday, August 27, 2008