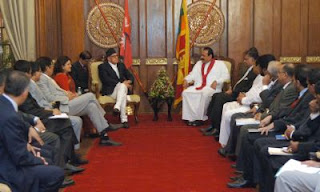 Nepal and Sri Lanka discuss development of Lumbini
Sri Lanka and Nepal agreed today (August 1) to develop Lumbini as the most attractive and sacred tourist destination in the South Asia region during talks between the leaders of the two countries.
This was decided when Nepal's Prime Minister, Girija Prasad Koirala who arrived in the island to take part the in 15th SAARC Summit to be held on August 2 and 3, met President Mahinda Rajapaksa today

This was the first bilateral between South Asian leaders on the sidelines of the Summit. President Mahinda Rajapaksa pointed out that he had made this proposal many years ago when he was only a Member of Parliament.

The Nepali leader briefed President Rajapaksa about the development of the Lumbini Airport and its importance in developing tourism in the area.
Lumbini, the birthplace of Prince Siddhartha Gauthama,is held sacred by Buddhists all over the world.
Posted by SRI LANKA TODAY at Friday, August 01, 2008 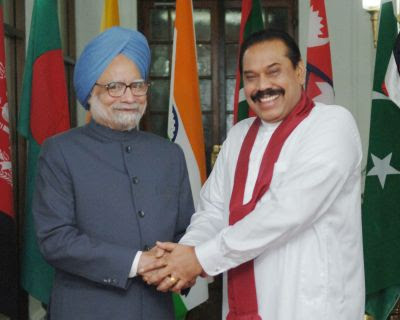 in this afternoon to take part in the 15th SAARC summit. warmly welcomed by the Prime Minister of Sri Lanka, Ratnasiri Wickramanayake at the air port.

President Mahinda Rajapaksa had a bilateral meeting with Girija Prasad Koirala Prime Minister of Nepal at the Presidential Secretariat in Colombo short while ago.

The Prime Minister of Nepal, Girija Prasad Koirala and the Prime Minister of Bhutan, Lyonpo Jigmi Thinley arrived at Colombo International Airport last night (July 31), while Dr. Fakhruddin Ahmed, the Chief Advisor to the Government of Bangladesh arrived this morning.

Tamil Nadu Opposition AIADMK leader Jayalalithaa Jeyaram yesterday threatened to challenge in the Indian Supreme Court the validity of the 1974 Indo-Sri Lanka pact handing over Katchchathivu Island to Sri Lanka if the UPA government failed to take action over the secession.
Quoting an Apex Court judgement in the Berubary union case on exchange of enclaves in Kutch with Pakistan, Ms. Jayalalithaa said according to the court ruling the ceding of Indian Territory to another country resulted in the “diminution of the territory of the union” and therefore should be endorsed by parliament through a constitutional amendment.
"Since no such step was taken by the Indira Gandhi government or any subsequent governments, the Dr Manmohan Singh government should seriously consider moving the Supreme Court to test the validity of conceding Katchchathiu to Sri Lanka. If the Prime Minister is not willing to do this, I will move the Supreme Court for a direction to the government of India to do

so or pray that the Apex Court set aside the ceding of Kachchathivu to Sri Lanka by the Indira Gandhi Government', she said.
Ms. Jayalalithaa said her party had always held that the ceding of Katchchathivu, an uninhabited island, was a monumental blunder and had insisted that the attacks on Indian fishermen would cease only if the country got the islet back.
"But the Central Government has repeatedly turned a deaf ear to our many protests. It appears to care less about the problems of Tamil Nadu and the Tamil people," she lamented.
Meanwhile about 80 fishermen from Tamil Nadu were allegedly assaulted by Sri Lankan Navy personnel in the Palk Strait, near Katchchathivu island, early last morning, the Indian media reported, quoting officials in Rameshwaram.
However Sri Lanka Navy spokesman, Commander D.K.P. Dassanayake, denied allegations of Navy involvement in the incident, adding that they had not received reports of any such incident up to last evening.
“We did not receive any reports of incidents involving Indian fishermen within Sri Lankan territorial waters today. We don’t know if such an incident occurred outside Sri Lankan waters. If so, it could have been the work of the LTTE to tarnish the image of Sri Lanka during the SAARC Summit. The LTTE has done things like this before as well,” Commander Dassanayake said.
According to the Indian media, the incident occurred in the midst of protests staged by political parties in the Indian state – which have been going on for the past few weeks -- demanding that the Centre take up the issue of recurring incidents with the island nation and provide adequate security to Indian fishermen.
Quoting the fishermen, the officials said about 80 of them, sailing in 20 boats, were assaulted with clubs while they were fishing around Katchchathivu island, which was ceded to Sri Lanka by India in 1974.
Many fishermen had to abandon their boats and jump into the sea to escape the assault. They remained in the water for more than one hour, then got back into their boats and returned to shore.
The ruling DMK and many other political parties, including AIADMK, CPI and MDMK have held protests over similar incidents in the past.
Posted by SRI LANKA TODAY at Friday, August 01, 2008

Sri Lanka ranked in countries most hit by terror

SL ranked third in countries most hit by terror

Sri Lanka has been ranked third and Pakistan fourth in the list of countries most hit by terror in the second quarter of 2008, a report released by the Centre of Excellence - Defence Against Terrorism (COE-DAT), a Turkey based anti-terror organisation, has said.

According to the report based on a worldwide research, a total of 2396 terrorist incidents occurred across the world during the said period, thereby killing a total of 4204 people and injuring 7614.
According to it, the ten countries most hit by terrorism in the second quarter of the year include Iraq with 857 terror incidents, Afghanistan with 334, Sri Lanka with 327, Pakistan with 216, India with 195, Somalia with 112, Turkey with 71, Thailand with 55, Nepal with 44, and Israel with 31 terror incidents.
Posted by SRI LANKA TODAY at Friday, August 01, 2008

South Asian nations vow to jointly fight terrorism
Eight South Asian countries, most of which are facing violent insurgencies, agreed Thursday to pool efforts to fight terrorism, a Sri Lankan government minister said.
The decision came ahead of a weekend summit in the Sri Lankan capital at which India and Afghanistan are expected to put pressure on Pakistan to do more to combat the militancy that has rattled all three nations.
Foreign ministers from the South Asian Association of Regional Cooperation also approved draft agreements on Thursday on launching a regional development fund of US$307 million and a food bank amid skyrocketing food prices, Sri Lankan Foreign Minister Rohitha Bogollagama told reporters.
Pakistan is grappling with restive tribal regions along its border with Afghanistan, where fighting between insurgents and government troops intensified this week. The government in Kabul is facing a resurgent Taliban-led militancy, and a spate of bombings has hit India in recent weeks.
But cooperation in combatting terrorism is likely to face roadblocks amid accusations from India and Afghanistan that Pakistan may be behind recent violence, including a huge bombing outside the Indian Embassy in Kabul on July 7.
Indian and Afghan officials say their information indicates Pakistani involvement in the attack, which killed some 60 people. Afghan officials have repeatedly said Pakistan is not doing enough to crack down on militants and even accused the country's intelligence agency of supporting the insurgency. Pakistan denies the charges.
Recent exchanges of fire between the Indian and Pakistani armies across the cease-fire line in the disputed Kashmir region have dampened relations between the two rivals.
The summit _ which represents one-fifth of the world's population and many of its most impoverished _ is comprised of Afghanistan, Bangladesh, Bhutan, India, the Maldives, Nepal, Pakistan and Sri Lanka.
Founded in 1985, it was set up to promote economic cooperation, but progress in most areas has been slow _ mainly because of the rivalry between India and Pakistan _ and it has often been derided as little more than a talking shop.
Nearly 19,000 police and soldiers have poured into the streets of Colombo and its suburbs to prevent attacks from Tamil rebels during the conference. The city's already tight web of checkpoints has increased and several major roads have been sealed off for the duration of the gathering.
Posted by SRI LANKA TODAY at Friday, August 01, 2008