Eid ul-Adha (عيد الأضحى), or the Festival of Sacrifice is a public and bank holiday in Sri Lanka. 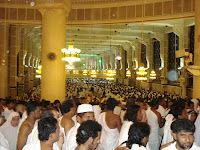 Muslims all over the world celebrate this holy day.
Hadji or the Festival of Sacrifice (Turkish: Kurban Bayramı) is a religious festival celebrated by Muslims in Sri Lanka and worldwide in commemoration of the willingness of Ibrahim (Abraham) to sacrifice his son Ishmael as an act of obedience to God.
The devil tempted Ibrahim by saying he should disobey God and spare his son. As Ibrahim was about to sacrifice his son, God intervened and instead provided a lamb as the sacrifice. This is why today all over the world Muslims who have the means to, sacrifice an animal (usually a goat or a sheep), as a reminder of Ibrahim’s obedience to God. The meat is then shared out with family, friends (Muslims or non-Muslims), as well as the poor members of the community (source: wiki)
It falls approximately 70 days after Eid ul-Fitr (end of Ramadan) and is celebrat 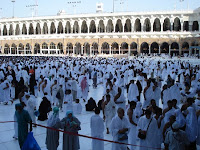 ed in honor of the prophet Abraham willingness to sacrifice his son as a proof of his loyalty to God. Celebrations usually include presenting an animal (usually a cow or a sheep) sacrifice, and the meat is shared with family, friends and those in need. The festival also marks the end of the Pilgrimage or Hajj to Mecca. During the Hajj, male pilgrims are required to dress only in a garment consisting of two sheets of white unhemmed cloth, with the top draped over the torso and the bottom secured by a white sash; plus a pair of sandals.
Posted by SRI LANKA TODAY at Saturday, November 28, 2009