A group of Sri Lankan media personals will depart from Colombo Bandaranaike International airport, 3rd |JULY 2011 for a tour to Pakistan. This group will be spend 10 days in Pakistan for an invitation which granted by government of Pakistan.Four  media persons of several media institution of Sri Lanka and Maldivians journalist participating to this tour. All of these five  media personals  will be visiting important places in Pakistan.
Pakistan high commission of Sri Lanka,have scheduled special arrangements to meet VIP persons in politics, Business, Education, tourism and media sector in Pakistan.

This tour will be developing the friendship between Sri Lanka and Pakistan through the well understanding media.
This tour organized and coordinated by Pakistan high commission of Sri Lanka.


Special reports of this tour, will be upload on 'SrilankaToday.Lake |house  journalist (Former Co Editor and  night editor of  'DINAMINA' national news paper) Chandana Wijekoon will be reporting  for  us about  that  tour  form  Pakistan.
Posted by SRI LANKA TODAY at Saturday, July 02, 2011

Government of Pakistan sponsored the construction

Government of Pakistan sponsored the construction
of a 3 storied state of art school building
The Government of Pakistan has sponsored the construction of a 3 storied state of the art school building in Gampaha district to support the education sector developmental drive of the Sri Lankan Government.
Commissioner of Pakistan H.E. Seema Ilahi Baloch  handed over a cheque for the construction of a three storied school building in Pasyala, Gampaha to the Honourable Minister of Economic Development Mr. Basil Rajapakasa at the Sri Lankan Presidential Secretariat. The said school is named as Babussalam Maha Vidyalaya and it comes under the purview of the Education zone of Minuwangoda.
﻿ ﻿ The foundation stone of the project was laid on 9 February 2011 by the High Commissioner of Pakistan, Seema Ilahi Baloch and Hon. Basil Rajapaksa, Minister for Economic Development. The work for the construction of school project is continuing with swift progress and the project is expected to be completed by the end of the current year. All efforts are being made by the concerned Sri Lankan Authorities with the assistance of Pakistan High Commission in Sri Lanka to ensure the quality of construction and its rapid completion.


This project would add to various projects carried out by the government of Pakistan in health, education and livelihood sectors in Sri Lanka. These projects includes construction of the district Hospital, Akurana; equipping science laboratories in schools, 30 computer centers and 6 stitching centers; providing ambulances to hospitals; award of Jinnah scholarships to students for continuation of education; and the award of long-term scholarships for study of medicine, engineering, dentistry, and pharmacy in Pakistan.


The total project cost for the construction of the said school is estimated at SIR. 49.2 million, out of which the Government of Pakistan is providing partial funding of SL Rs. 14 million as grant through its High commission in Colombo.


The newly constructed school will be catering to the local population of Pasyala area. Presently, the school has an enrollment of over 500 students (both male and female), with 19 teachers as the instructional staff for the institution.


The 3 storied building would add 7200 sq.ft. of floor area to the school, it will include all the modern facilities including a library, a fully equipped home science laboratory, computer laboratory, and class rooms.
During the ceremony Honourable Minister of Economic and Development appreciated the support and cooperation by the Government of Pakistan for a noble cause. The Honourable Minister said that the Government and people of Pakistan have always supported the Government and people of Sri Lanka.

The civilizational links between two peoples and cultures date back 2500 years, to the time when the Indus and Gandhara civilizations and Budhist culture had prospered in what is now Pakistan. Both countries have made impressive efforts to preserve and build on these solid foundations. Since the establishment of diplomatic relations between Pakistan and Sri Lanka in 1948, the two countries have consistently maintained close, cordial and mutually supportive relationship.
The school construction project in Pasyala is expected to create professionals amongst the young citizens for the future benefit of Srilanka and it will further cement the good relationship between the two great nations. It should be emphasized that the collaboration in the field of education between the two brotherly countries will definitely uplift the intelligence of the people. With this project the Government of Pakistan has reiterated its continued support to Sri Lanka in enhancing younger generation’s nation building capacities with better educational opportunities. Only strong societies will have resilience to sustain the emerging challenges, as strong societies make stronger nations. Pakistan and Sri Lanka need to help each other to be stronger in the face of contemporary challenges.
Posted by SRI LANKA TODAY at Saturday, July 02, 2011

Japan Provided Human Resource Development Scholarships
to Young Sri Lankan Public Officials
The Government of Japan has provided opportunities for young public officers with high potential to pursue a two-year Masters Degree in Japan with a view to contributing to the development efforts of Sri Lanka under its Human Resource Development Scholarship scheme. A sum of 208 million Japanese Yen (approximately Rs. 280 million) was provided to cover the expenses for the 1st and 2nd batches of 30 scholars.
This scholarship scheme was initiated in 2010 in Sri Lanka and this year 15 officials were awarded the scholarship. They have been selected from four Ministries, namely, Ministries of Finance and Planning, Public Administration and Home Affairs, Economic Development and Provincial Councils and Local Government to pursue their Masters Degree programs in public policy, public administration, regional development and poverty alleviation, and macro and development economics at the International University of Japan, International Christian University and Hiroshima University. Upon completion of the study program, the officers are expected to contribute towards the preparation of comprehensive development and poverty reduction plans as well as public policy for Sri Lanka utilizing their practical knowledge and skills gained in Japan.
The Government of Japan gives much emphasis to human resource development and technical cooperation through “people” and provides various study and training opportunities for Sri Lankan people. So far over 11,000 Sri Lankan trainees have completed short and long-term training in Japan and in third countries through Japan’s assistance. In addition, Japan is presently conducting training programs on community development for frontline officers in the Northern and Eastern Provinces.
The signing of the Exchange of Notes for the Human Resource Development Scholarship scheme took place on 29 June at the Ministry of Finance and Planning between H.E. Mr. Kunio Takahashi, Ambassador of Japan on behalf of the Government of Japan and Dr. P.B. Jayasundera, Secretary, Ministry of Finance and Planning on behalf of the Government of Sri Lanka. In addition, the signing of the Grant Agreements took place between Mr. Akira Shimura, Chief Representative of JICA Sri Lanka Office and Dr. P.B. Jayasundera,
Posted by SRI LANKA TODAY at Saturday, July 02, 2011

Australian Special Envoy on Pakistan / Afghanistan calls on the Pakistan Prime Minister
Pakistan Prime Minister Syed Yusuf Raza Gilani has said that Pakistan is committed to playing a facilitator’s role in the Afghan reconciliation process for the restoration of peace, stability and prosperity in Afghanistan and the region.
He emphasized upon the international community to assist Afghanistan and Pakistan achieve this objective by undertaking mega projects in infrastructure, energy and communication sectors to facilitate connectivity between the two countries and the region beyond.  He stated that Pakistan would like to extend Afghan-Pakistan Transit Trade Agreement (APTTA) to Central Asia.
The Prime Minister was talking to Mr. Ric Smith, Australian Special Envoy for Afghanistan and Pakistan who called on him at the PM’s House this morning.
The Prime Minister while terming Pakistan’s cordial relations with Australia as important, called for enhanced people to people contacts, high level visits and Parliamentary exchanges between the two countries.  He said it was imperative that both countries look beyond the war on terrorism (and restoration of peace in Afghanistan) to bring in permanency and consistency in the bilateral relations.  Pakistan, he said, was keen to develop strong cooperation with Australia in multi-faceted fields including social sector, defence and agriculture.  He expressed his government’s gratitude for the generous Australian support extended to Pakistan in the aftermath of the 2005 Earthquake and the floods last year.
While responding to the formal invitation from the Prime Minister of Australia to attend the forthcoming Commonwealth Heads of Government’s Meeting (CHOGM) in Perth in October, the Prime Minister asked the Special Envoy to convey his thanks and best wishes to Prime Minister Ms Julia Gillard.  He added that he was looking forward to his visit to Perth and interaction with his counterpart and other Australian leadership.
Mr. Ric Smith who had come to Islamabad after his visit to Kabul, congratulated the Prime Minister for his personal role in substantive improvement of Pakistan-Afghanistan bilateral relations during his government’s tenure. He shared with the Prime Minister his assessment of the present situation in Afghanistan; the reconciliation process and the planned withdrawal of ISAF forces from Afghanistan.  The Prime Minister reiterated Pakistan’s principled stand that a military solution was not an option. All sides will have to seek a political solution with emphasis on socio-economic development in Afghanistan. He also stated that during his visit to Afghanistan, he had noted a new appreciation among Afghan officials as well as ordinary Afghan people about Pakistan’s constructive approach to facilitate an Afghan owned and Afghan led peace process in that country.  Mr. Ric also felicitated the Prime Minister for his vision to promote cordial friendly ties with India and for the efforts of his government for resumption of dialogue with Pakistan’s eastern neighbour.
Australian High Commissioner to Pakistan Mr. Tim George, Australian Ambassador to Afghanistan Mr. Paul Foley, Minister for Interior Senator A. Rehman Malik, Secretary Defence and other senior officers were also present in the meeting.
Posted by SRI LANKA TODAY at Saturday, July 02, 2011

Sri Lanka can trade more with Asia: IMF official
(LBO) - Sri Lanka should expand trade links with Asia, especially with fast growing economies of India and China, at a time when consumption in industrialized nations is weak, an International Monetary Fund official said. 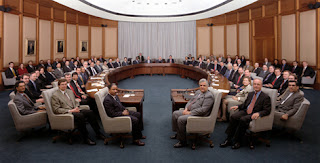 Trade among East Asian nations have grown fast partly due to their integration with global supply chains where parts made in one country are put into final products in another International Monetary Fund's resident representative Koshy Mathai said. "Twenty percent of Sri Lanka's exports go to the US, 39 percent go to the EU, basically 60 percent are going to two regions which are growing at an absolutely pathetic rate," he told members of Ceylon Tea Trades Association.
"So if we are talking about driving our growth going forward, this is not going to be the source of that growth in future years.
"A grand total of 5.0 percent of our exports go to India. How about China? One percent goes to China."
Sri Lanka had a vibrant trade with India's so called 'Coromandel coast' as South India was known at the turn of the 19th century when the British came to the island.
After independence from British rule amd currency depreciation and exchange controls, trade controls were erected in South Asia.

- Sri Lanka's economy grew 7.9 percent in the first quarter of 2011, up from 7.1 percent in the same period a year ago, with strong growth in industry and services while the agriculture sector contracted.

The industry sector grew by 11.1 percent and services by 9.5 percent while agriculture contracted by 5.1 percent, department of census and statistics said. "We were a little concerned initially that because of the floods agricultural output may be low," central bank governor Nivard Cabraal said.
"But power generation was substantial and that amply compensated," he told LBO.
Cabraal said the Central Bank would maintain the annual target at 8.5 percent as initial information about the second quarter was "encouraging" and a decision on whether or not to revise the target would be taken after the second quarter GDP data is out.
Economic growth has been picking up with the end of the island's 30-year ethnic war in May 2009.
Posted by SRI LANKA TODAY at Saturday, July 02, 2011