He was on his way back home form work and abducted some close to Nugagoda town. Some people who have seen him pushed in to a white van alerted the journalists on the abduction.
Later he was found left on the road side by some people. He had been severely assaulted. Later he was admitted to ICU of the Colombo general hospital. Reports say that he is out of danger. 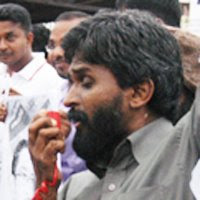 May editorial of the state controlled Sinhala language daily called for stoning and expelling of so called professional journalists who grow beards. (Poddala Jayantha is known for his beard)

Last few weeks has seen continued attacks on journalists who campaigned for media freedom and justice for abducted and killed journalists in Sri Lanka calling them traitors by various politicians and pro state and state controlled media.
Posted by SRI LANKA TODAY at Tuesday, June 02, 2009