UPFA 6 seats and UNP 4 seats. JVP no any seat in Polonnaruwa District 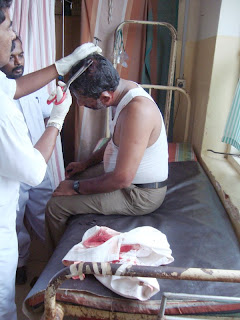 JVP MP S.K. Subasinghe was assaulted around 5.15 this afternoon (Aug. 23rd) when he visited Galthambarawa polling centre in Polonnaruwa to inquire into a dispute there.
He had received information that UPFA supporters had prevented his party's representative at the booth from leaving the place.
When Mr. Subasinghe had attempted to mediate, he was assaulted by a group led by Minister Maithripala Sirisena's brother Chaminda.
The JVP MP has been admitted to Polonnaruwa Hospital with serious injuries.
Posted by SRI LANKA TODAY at Sunday, August 24, 2008 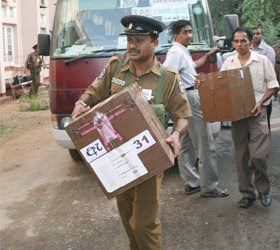 Voting to elect representatives to the North Central and Sabaragamuwa Provincial Councils closed at 4.00 pm today (Aug. 23rd), with a turnout of between 65 and 70 percent, said the Elections Secretariat.The sealed ballot boxes are being transported to counting centres by now, while the counting of postal votes is underway.

The EC expects to release the first result by 2.00 am tomorrow.

The special poll monitoring coordinating unit said the election had been relatively peaceful.

However, the Centre for Monitoring Election Violence said it has received 43 complaints, including 24 serious incidents.

Its co-convener Uvindu Kulakurasuriya said considering the serious nature of pre-poll violence and the terror situation that ensued, this election could not be considered a free and fair one.

Meanwhile, R. Yogarajan of the Ceylon Workers' Congress allege that around 10,000 Tamil estate workers were denied their vote due to national identity card being made compulsory at the polls
Posted by SRI LANKA TODAY at Sunday, August 24, 2008