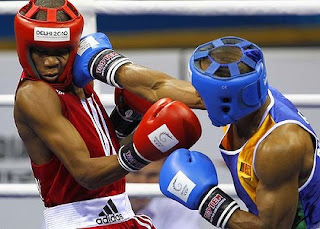 Sri Lanka gets first boxing gold in 72 years
NEW DELHI, October 13, 2010 (AFP) - Manju Wanniarachchi on Wednesday won Sri Lanka's first gold medal in boxing in 72 years after beating Wales' Sean McGoldrick in the bantamweight division.
The 30-year-old from Kandy won a points decision 16-14 to beat the 18-year-old, who caused an upset in the semi-finals by beating the Olympic bronze medallist and the beaten finalist from Melbourne, Louis Julie.Bronze medallists were Tirafalo Seoko of Botswana and Julie of Mauritius.
Wanniarachchi, who works for a company that makes was awarded the fight after the boxers were level at 7-7 after the final round.
His manager Dian Gomes told AFP: "It's a great victory for us after 72 years. It means so much for boxing in Sri Lanka. This is one of the greatest victories of all time.
"It's as good as winning the cricket World Cup."
Wanniarachchi is a product of the Slimline Boxing Club that is part of MAS Holdings, which makes lingerie for a number of leading brands around the world. The boxer also works in the knicker factory.
He became the island nation's first boxing medal winner since the Auckland Games in 1950 by winning his quarter-final match on Sunday, guaranteeing him at least a bronze.
Sri Lanka's last gold was won by Ansdale "Barney" Henricus in Sydney in 1938.McGoldrick said he was disappointed with the way he fought but had no complaints about the result.
"He was a solid puncher," he told reporters. "It's been a difficult week and I was a little bit flat and not as sharp as I could have been."
Had he won, McGoldrick would only have been the fourth boxing gold medal winner for Wales. His teammates Jermaine Asare (light heavyweight) and Keiron Harding (middleweight) won bronze following their defeats in the last four.
Posted by SRI LANKA TODAY at Wednesday, October 13, 2010