Gilani  for Due acknowledgment of Pakistan’s Share of  Successes in 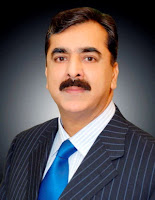 Pakistan appreciates that UK realizes crucial role of Pakistan’s in the peaceful settlement of Afghanistan along the lines that no negative fall out effects Pakistan or any other country of the region after the scaling down of international forces .Prime Minister Syed Yusuf Raza Gilani acknowledged this support in a meeting with Mark Philip Sedwill the UK’s Special Representative for Afghanistan and Pakistan who called on him, here, today. Prime Minister asserted Pakistan’s  stance that West should draw  a  clear cut  road map and  framework  for  an Afghan led  solution ... While elaborating upon international cooperation  on war against terrorism  the prime Minister pointed out that despite high level of cooperation from Pakistan including intelligence sharing due recognition has not been accorded to Pakistan for its share in the  victories  in the war on terror but when ever there is any failure the onus is  directed towards Pakistan.

He called upon international community to consider Pakistan as   partner in real sense having share in both successes and failures.  He said that the impact of this attitude was contrary to the support that Pakistan requires to strengthen democracy in Pakistan which was vital in defeating terrorism. Only democracy, he added, can help Pakistan in sustaining political support and stabilize the economy much needed to confront the security challenges which threaten international peace.
Mr. Sedwill assured that the British government is fully cognizant of Pakistan’s concerns in the scenario for settlement of Afghan issue .and would like to work more closely with Pakistan. UK he mentioned clearly understands Pakistan’s point of view as well as its strengths and influence for peaceful settlement of Afghanistan solution.  He further added that call for enhancing Pakistan’s trade with EU and beyond should be seen as a strategic issue rather than a simple economic issue. Prime Minister Gilani further added that cross border incursions were being carried out by the elements who do not want Pakistan and Afghanistan to come  closer and work together  for stability in the region.  He emphasized for checking these incursions to avoid derailment of close brotherly relations between the two countries, While referring to two tier Joint Commission on Reconciliation that has  been set up by  Pakistan and Afghanistan he said that inaugural meeting of the first  tier level of the commission led by the chief executives of two countries was held in Islamabad had helped to establish better understanding on both sides. The first  meeting of the Joint Commission’s  second tier level which was held in Kabul on June 29th this year also showed positive outcome  he added. The Prime Minister congratulated Mr. Sedwill on his appointment to his present position. He expressed confidence that his appointment that would be helpful in promoting peace in the region due to his knowledge and understanding of both the countries acquired through serving in both Afghanistan and Pakistan during his diplomatic career. The Prime Minister called upon the international community to focus on stability and peace in Afghanistan in the post 2014 scenario as  the region can not afford Afghanistan plunge into chaos  again. He said that Pakistan was trying to fight the menace of terrorism despite heavy odds but need international support to sustain its commitment. Dwelling upon parameters of Pakistan’s policy on Afghanistan, he said “ our position is very clear ,we want a stable, peaceful and prosperous Afghanistan through  a smooth transition. Pakistan he added believes in non –interference in Afghanistan’s internal affairs. The Prime Minister emphasized that the West needs to have a clear roadmap and hoped that the time  before the  Bonn Conference would be  utilized to the maximum to draw a strategy that ensures peaceful and prosperous  Afghanistan after the  possible wit drawl of ISAF forces in 2014.
Posted by SRI LANKA TODAY at Thursday, July 21, 2011 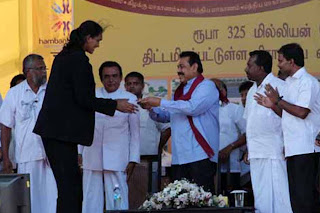 
He said defence expenditure which was about 5.0 percent of gross domestic product during the war years, has now dropped to 3.0 percent. "We managed the budget under stress, because the country was at war," Jayasundera told members of the Joint Apparel Association Forum, an industry body.
"So we had fairly high defence expenditure, sometimes as high as five percent of GDP. It has now dropped to three."
Spending Trends
In 2010, defence spending fell to 190 billion rupees or 3.4 percent of GDP as the economy expanded compared to from 3.9 percent of GDP in 2009.
"So this number is going to go down, because we no longer spend money on aircraft, buying ammunition or military hardware," Jayasundera said.

"Probably we have to build little bit capital stock to have fairly high tech security. "But since there is no war threatening the existence of the country itself, we can have planned defence expenditure like any other country which will also be conducive for national development."
For 2011 defence spending was originally slated at 214 billion rupees or 3.4 percent of forecasted GDP. But spending was upped last month by another 20 billion rupees to build a new defence headquarters, taking the share up to about 3.7 percent.

However the government is selling land where military facilities were earlier sited, to raise funds.
Sri Lanka's citizens have taken up arms against the state three times since independence from British rule, amid a steady erosion of economic freedoms, civil liberties and rule of law.
Sections of the Sinhalese majority have engaged in armed rebellions twice and the Tamil minority once. However analysts say since 1977, a series of economic freedoms have been restored, leading to higher growth.
Rebuilding
Jayasundera said the government was now investing heavily in infrastructure and re-building the war torn areas.
"Where do these savings go now? It is going for development," Jayasundera said.
The government is investing rapidly, people can see it. All over where you go you can see a bridge and irrigation scheme; Jaffna KKS (a town in the north) or down south."

The government has maintained capital spending to about 6.0 percent of gross domestic product. This year about 1.1 billion rupees would be spent on roads alone.
A finance ministry report said earlier that the military itself was now engaged in reconstruction activities. Health expenditure previously used to treat injured soldiers, were now diverted to the general public.
He said in the last budget the government has abolished a series of 'nuisance' taxes resulting in a 15 billion rupee revenue loss. He said as a result, transaction costs related to a series of taxes were no longer there for businesses, not counting the nuisance value.
"Road barriers are not there," he said. "Interest rates have come down. War risk is not there. Now these nuisance taxes are not there.
"No separate provincial national taxes. So I am sure this saving must be somewhere. This saving is with the economy now. So it has to produce the real activities."
Sri Lanka's inflation is now on the high side of single digits and lending rates in the low double digits.
Posted by SRI LANKA TODAY at Thursday, July 21, 2011