Protest as president in London

Protest as president in London 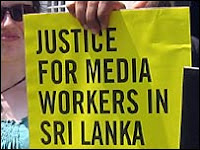 South Asia director of the Amnesty International , Sam Zarifi, said the government should understand that Sri Lanka is ‘not forgotten’ by the international community.

The Amnesty International organised a demonstration in front of Commonwealth Secretariat in London protesting human rights violations in Sri Lanka. 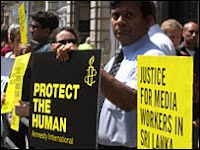 inda Rajapaksa is attending a Commonwealth leaders meeting in London.


A journalist in Jaffna, P Devakumarana, was killed and a senior journalist, Keith Noyahr, was brutally assaulted during the past few weeks.

“Certainly the situation in Sri Lanka has been the source of the increasing concern around the world because the deterioration has been rapid,” Sam Zarifi told BBC Sandeshaya.

The government is not seen to be willing, he said, to respond to the concerns by human rights watchdogs and the international community.

The AI insists that the Tamil Tigers are also accused of gross human rights violations including launching attacks on civilians.

“We hope President Rapaksaksa understands that this is not a forgotten conflict,” Mr. Zafiri added.
Posted by SRI LANKA TODAY at Thursday, June 12, 2008