No fire zones for K’nochchi people 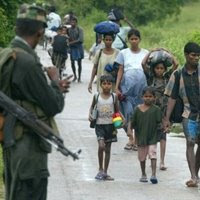 No fire zones for Kilinochchi people
The military has declared ‘no-fire zones’ for civilians of Kilinochchi to crossover to cleared areas of the north.

According to military spokesman Brig. Udaya Nanayakkara, these zones are located at Oddusudan and Vishwamadu.

People could use these routes to leave areas under LTTE control without any harm, he said.

Under a new law signed yesterday by US President George W. Bush, leaders of military forces and arm

on US soil for the offense, even if the children were recruited or served as soldiers outside the United States. The law imposes penalties of up to 20 years, or up to life in prison if their action resulted in the child’s death. It also allows the United States to deport or deny entry to individuals who have knowingly recruited children as soldiers.

“The US is saying to the world that using child soldiers is a serious crime and that it will take action,” said Jo Becker, children’s rights advocate for Human Rights Watch. “Military commanders who use children can no longer come to the United States without the risk of ending up in jail.”

The Tamil Tigers have recruited thousands of children during the

25 years of Sri Lanka’s conflict. UNICEF has documented 6,284 cases between January 2002 and September 2008, with 1,426 cases outstanding. The majority of families do not report the recruitment of children, often because they are afraid. Field investigations by Human Rights Watch found that the LTTE threatened and coerced families that refused to give a son or daughter to the LTTE, a

nd that in some cases, children were abducted.

The TMVP (Karuna group) has also recruited hundreds of children into its armed wing. UNICEF has documented 528 cases between April 2004 and September 2008, with 127 outstanding. Human Rights Watch investigations documented TMVP abduction of children from their homes, workplaces, playgrounds, public roads, and camps for the internally displaced. Human Rights Watch also found that government security forces have been complicit in the abductions, which have taken place in areas of strict government control.

002 and 2008, the UN secretary-general has cited the LTTE in five successive reports to the Security Council for violations of international law prohibiting the recruitment and use of child soldiers. He cited the TMVP in two reports since 2006.

The Child Soldiers Accountability Act was introduced by Senator Richard Durbin of Illinois and adopted unanimously by both the US House of Representatives and the US Senate in September 2008.

In a statement issued on October 3, Senator Durbin said: “The United States must not be a safe haven for those who exploit children as soldiers. Period. The use of children as combatants is one of the most despicable human rights violations in the world today and affects the lives of hundreds of thousands of boys and girls who are used as combatants, porters, human

mine detectors and sex slaves. The power to prosecute and punish those who violate the law will send a clear signal that the U.S. will in no way tolerate this abhorrent practice” (http://durbin.senate.gov/showRelease.cfm?releaseId=304082 ).

The recruitment and use of children as soldiers was recognized in 1998 as a war crime under the jurisdiction of the International Criminal Court. In 2007, four former military commanders from Sierra Leone were convicted by the Special Court for Sierra Leone for recruiting and using children as soldiers. Rebel and military commanders from the Democratic Republic of Congo and Uganda have also been charged under the International Criminal Court with recruiting and using child soldiers, though none have yet gone to trial.

tribunals and the national courts of conflict-affected countries,” Becker said. “The United States is stepping up to hold these war criminals accountable in its own courts.”