Mammoth crowd at first-ever May Day rally in East:


The Eastern populace is poised to hand over a resounding victory to the Government at the May 10 Provincial Council Election to continue the momentum of the Eastern Resurgence programme, President Mahinda Rajapaksa declared yesterday in May day rally. 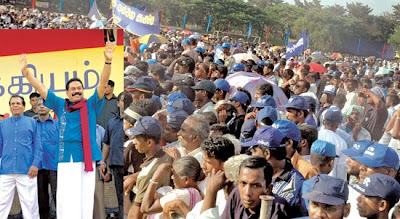 President Rajapaksa was addressing the historic May Day rally held here, symbolising the new dawn in the East after more than two decades of LTTE tyranny. The first ever May Day celebration in the East by a major political party since independence was attended by a massive crowd.

This year's May Day celebrations in the East should be dedicated to the heroic Forces who spearheaded the humanitarian mission to liberate the people who were living under LTTE clutches for more than two decades, the President said.

He said a Government victory in the East would further encourage soldiers to liberate the Northern masses as well.
Posted by SRI LANKA TODAY at Friday, May 02, 2008