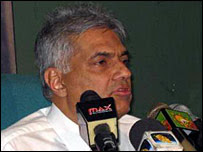 Opposition leader Ranil Wickremasinghe says Tamil National Alliance (TNA) has to be brought in to the deliberations of the All Party Representative Conference (APRC).

Wickremasinghe who is in India meeting Indian leaders to apprise them of the current political situation in Sri Lanka has met India's main opposition the Bharathiya Janatha Party's top leaders including former Foreign Ministers of India, Jaswant Singh and Yashwant Sinha.

Following his talks with Jaswant Sing, he told journalists that the government and the United National Party (UNP) should both have discussions with the TNA towards achieving peace in the country.

He also says that he already had discussions with the President in this regard in finding out a political solution duly involving the Tamil National Alliance parliamentarians.

Wickremasinghe said that Mr.Singh wanted some information from him on the latest situation in Srilanka which he did, and had discussions based on improving Indo-Lanka relations.
Source:BBC
Posted by SRI LANKA TODAY at Wednesday, November 19, 2008