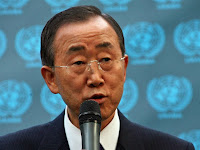 ring the reports of the arrest of Sri Lanka's defeated opposition presidential candidate, General Sarath Fonseka by the Sri Lanka military, the United Nations Secretary-General Ban Ki-moon Monday appealed to all the parties in Sri Lanka and their supporters to show restraint and refrain from violence.
The UN chief urged all parties to adhere to the electoral laws and to avoid provocative acts, not only in the election period, but also in the post-election stages.
Responding to the questions from journalists today about the General's arrest Martin Nesirky, Spokesperson for the Secretary-General said the United Nations was monitoring the situation.
The spokesperson for Mr. Ban said that "the peaceful conduct of the first post-conflict national election and its aftermath is of the highest importance for long term peace and reconciliation in Sri Lanka."
The statement was issued following media reports that the Sri Lankan military has arrested Sarath Fonseka, the former army chief who contested the recent presidential elections.
He was arrested by the military police on charges of military offences conducted during his time as the army commander, the Sri Lankan government said yesterday. Military investigations are in progress and a detailed statement will be issued later, the Media Center for National Security said.
Posted by SRI LANKA TODAY at Tuesday, February 09, 2010 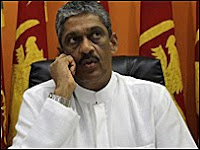 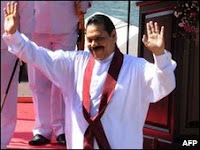 arath Fonseka, has been arrested at his office in Colombo.
Gen Fonseka was defeated by incumbent Mahinda Rajapaksa last month by six million votes to four million.
Gen Fonseka rejected the results and vowed to challenge them in court.
The initial allegations brought by the government against Gen Fonseka, 59, were put simply as "committing military offences".
The government had earlier been seeking legal advice on bringing a court martial on charges of plotting to overthrow the administration.
The BBC's Charles Haviland in Colombo says he later learned from National Security Director-General Laxman Hulug

Mr Rajapaksa won the election by 57% to 40%
A spokesman for the People's Liberation Front told Agence France-Presse: "The general refused to be taken away. They grabbed him and virtually carried him away after threatening the others. There must have been over 100 soldiers."
The politicians at the meeting said the military police had given no reasons as they made the arrest.
Mr Hakeem said Gen Fonseka had complained that because he was no longer in the military he should not have been arrested by military police.
Earlier in the day, Gen Fonseka had said he was prepared to give evidence in international courts on any war crimes charges brought in relation to the civil war.
"I am definitely going to reveal what I know, what I was told and what I heard. Anyone who has committed war crimes should definitely be brought into the courts," Gen Fonseka said.
Our correspondent, Charles Haviland, says the arrest was dramatic but not unexpected and there must now be questions about whether this is the start of a bigger clampdown on the opposition.
After the election, the government had accused Gen Fonseka of divulging sensitive information to the public, and of plotting both a coup and to assassinate the president and his family.
Gen Fonseka has vehemently denied the charges.
He said h 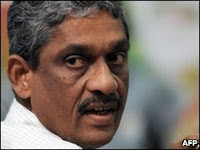 e feared an assassination attempt against him and had been told that airports would not allow him to leave the country.
Analysts had predicted a closely fought election contest between the two architects of the government's victory over the Tamil Tigers.
But in the end President Rajapaksa won the vote comfortably - capturing 57% of the vote, while Sarath Fonseka won 40%.

FROM OTHER NEWS SITES