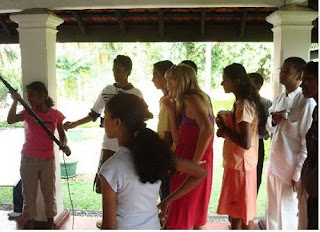 Sri Lankan youth become filmmakers at US Embassy Film Festival Camp
www.Asiantribune.com
The ten-day Children’s Film Camp organized by the U.S. Embassy and the Galle Film Festival draws to a successful close this weekend with a screening at the Punchi theatre in Borella of the eight short films made by the participants. There will also be a public screening of their films at the Galle Film Festival this October. The films will also be posted on the U.S. Embassy’s website and its Facebook page (US Embassy Colombo).
Forty young people from Moneragala, Hatton, Batticaloa, Puttalam, Trincomalee, Hambantota, Jaffna, Galle, Anuradhapura, Matara and Bandarawela lived together and learned the art and techniques of film making. This ten-day workshop was held at the Sarvodaya Training Centre in Bandaragama.
The American acting coach Constance Tillotson collaborated with well known Sri Lankan filmmakers Anoma Rajakaruna and Kasinathar Gnanadas. A committed team of trilingual volunteers also facilitated the smooth flow of the camp.
Eight groups of five young people each made short films that they wrote and developed. The films ranged from thought-provoking stories about sibling relationships, dangers of prejudice, effects of discrimination, eradication of dengue using the format of a ’thovil’ (with a ’yaka’ as the mosquito) and a rather tragic story about tsunami relief. One team had made their film a “silent film“.
Read More: www.asiantribune.com
Posted by SRI LANKA TODAY at Saturday, August 22, 2009

Sri Lanka Government has deported 75 foreigners, who have engaged in business activities while holding tourist visas.
Assistant Controller of the Investigations Unit of the Department of Immigration and Emigration, W. Devendra Raja told the media that they have arrested 120 foreigners who ran businesses without proper visas. Out of that total, 75 foreigners have been deported, he added.
Another 29 had been detained at the Mirihana Detention Centre for violating immigration and emigration laws.
The arrested foreigners were from India, Pakistan, China and Thailand, the Department of Immigration and Emigration said.
Posted by SRI LANKA TODAY at Saturday, August 22, 2009 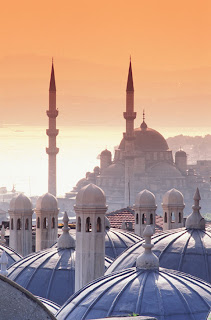 Ramazan fast begins the Colombo Grand Mosque announces
Ramadan, the holiest month of the Muslim calendar, starts today.
For the next 30 days, a billion observant Muslims will abstain from food and sexual relations from sunrise to sunset, and engage at night in extra prayer. They are also expected to refrain from anger, retaliation, gossiping and impatience during Ramadan as fasting is intended to teach self-restraint.
The ninth month in the Muslim calendar, the date of Ramadan varies slightly each year, as its start depends on the first sighting of the new moon.
The Coordination Committee of Major Islamic Centres and Mosques Fasting yesterday confirmed that Ramadan will begin at dawn tomorrow, 4.06am in the UK.

Colombo Grand Mosque General Secretary Nazushan Hassen stated in a press release that reliable evidence of sighting the New Moon was received yesterday evening and therefore, it was decided to complete the month of Sha'ban as 29 days.
Posted by SRI LANKA TODAY at Saturday, August 22, 2009 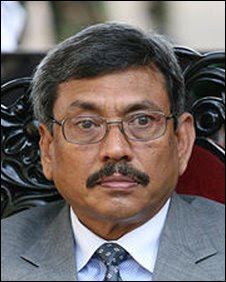 The Defence secretary has called on foreign countries to hand over Tamil Tiger rebels and their assets, worth of millions of dollars.
The demand by Gotabaya Rajapaksa came weeks after the arrest of the new Tamil Tiger leader, Selvarasa Pathmanathan.

The LTTE had a well-organised overseas network to fund their arms purchases.
Its investments abroad are said to range from grocery shops to real estate, from petrol stations to temples, from commercial shipping to financing movies.
But most of these activities were carried out under different names as the rebels were banned in many countries.
The estimates about the LTTE's assets and investments range from $300m (£182m) to $1bn. Mr Pathmanathan is believed to have substantial knowledge about these assets.
"Once it is proved that these assets belong to the LTTE, then concerned countries should hand over the assets as well as the remaining LTTE members to Sri Lanka," Mr Rajapasa said.
He said that "if the western world is serious about fighting terrorism" it would not provide safe sanctuary "to a terrorist organisation like the LTTE".
The arrest of Mr Pathmanathan is regarded as a significant blow to the LTTE's overseas operations, especially when it was desperately looking for a figurehead to revive the organisation and boost its sagging morale following its defeat on the battleground.
Posted by SRI LANKA TODAY at Saturday, August 22, 2009