al cooperation in various fields.
President Zardari, Hu emphasize on further reinforcing comprehensive strategic partnership, bilateral cooperation
The over one hour meeting between the two presidents was followed by delegation level parleys.
The Pakistani side was headed by President Asif Ali Zar

dari, while Chinese President
Hu Jintao led his side at the talks held here at the Great Hall of the People.
The Chinese side assisted President Hu at the delegation level meeting included Foreign Minister Yang Jiech, State Counselor Dai Ping Guo, Governor Peoples Bank of China Zhou Xiao Chuan and other officials.
Foreign Minister Makhdoom Shah Mehmood Qureshi, Defence Minister Ahmed Mukhtar, Minister for Environment Hamidullah Jan Afridi, Advisor on Interior Rehman Malik, Advisor on Finance and Economic Affairs Shaukat Tareen, Media Advisor to President Farhatullah Babar, Foreign Secretary Salman Bashir, Information Secretary Akram Shaheedi, Secretary General PPP Jahangir Badar and Pakistan’s Ambassador to China Masood Khan assisted President Asif Ali Zardari during the delegation level talks.
In his opening remarks President Hu Jintao showered praises on the efforts and contribution rendered by Bhutto family in the promotion of Pak-China relations.
He further said that the first state visit paid by President Zardari to China as a part of tradition demonstrates the importance Pakistan attaches to the bilateral ties.
President Hu also mentioned special relations of Shaheed Zulfikar Ali Bhutto with Mao Zhe Dong and Zhou Enlai which he observed played an effective role in the promotion of bilateral relations.
President Hu expressed appreciation for the support and the financial assistance extended by Pakistan for the May 12 earthquake victims of Sichuan province.
The Chinese President also hailed the participation of Pakistani contingent with enthusiasm in the 2008 Beijing Olympics.
The Chinese President also praised the participation of Bilalwal Bhutto Zardari and Prime Minister Syed Yousuf Raza Gilani in the Beijing Olympics and said it is reflective of the warmth in bilateral relations between the two countries.
Congratulating Asif Ali Zardari on his election as President, President Hu hailed him for his first state visit to China and said it was reflective of depth and warmth in the time tested and all weather bonds.
Reciprocating the opening remarks from his Chinese counterpart Hu Jintao, President Zardari said the warm welcome accorded to him reflected the level of love and affection of the government and the people of China towards Pakistan.
President Zardari said the high stature leaders from Pakistan and China were the architects of strong foundation of Pak-China relations that strengthened over the period of time, which is the testimony of their sagacious political approach and long term vision.
He expressed the hope that his meeting with the Chinese counterpart during his first official visit will transfuse further resilience and vibrancy in the bilateral relations
taking them to new heights.
Earlier, President Asif Ali Zardari was accorded a warm red carpet welcome at an impressive formal ceremony at the Great Hall of the People reflecting the warmth of people-to-people bonhomie and depth of strong bilateral friendly bonds.
The two leaders then ascended the canopied dais and the national anthems of both countries were played, followed by 21-gun salutes. The two leaders later inspected the guard of honour and march past by a smartly dressed soldiers of Peoples Liberation Army (PLA).
After the delegation level talks, both sides signed eleven agreements, MoU and Protocols in different fields with an objective to bolster existing level of cooperation on different areas.
Sourse:
High Commission of Pakistan-Sri Lanka
Posted by SRI LANKA TODAY at Monday, November 03, 2008

The visiting President also introduced the members of his entourage to the Chinese President.
The two leaders then ascended the canopied dais and the national anthems of both countries were played, followed by 21-gun salutes. The leaders later inspected the guard of honour and march past by smartly dressed soldiers of Peoples Liberation Army (PLA).

'No end till we get Prabhakaran' - President

end till we get Prabhakaran' - Sri Lanka President

The Government will declare a ceasefire only if the Tigers lay down weapons and surrender, President Mahinda Rajapaksa told India Today in an interview.

Speaking to India Today Managing Editor Raj Chengappa at Temple Trees, President Rajapaksa said the Forces have Prabhakaran cornered and he will be caught soon. "The day Prabhakaran is caught, military operations would be over. Soon after that we will give a political solution as we did in the East," the President said.

Asked whether the war would be over if Kilinochchi falls, he said: "I don't call it a war. It is a military operation we have launched to wipe out terrorists. Kilinochchi is the LTTE headquarters. 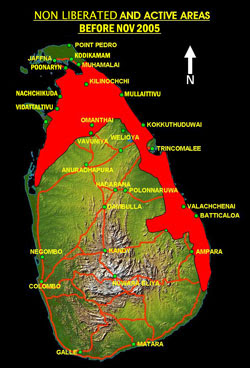 We are also advancing from the East to take Mullaitivu. Progress is slow because we want zero civilian casualties." "Now, one of LTTE's child soldiers is the chief minister and another of Prabhakaran's commanders is a Member of Parliament. But Prabhakaran must be punished for his crimes.

Let's not forget he killed Rajiv Gandhi apart from so many Sri Lankan leaders. He has to undergo trial and if India is interested in having him extradited we will do that," he remarked.

The President recalled how the LTTE used ceasefires to strengthen themselves-buy weapons, firepower, recruit soldiers and make bunkers. "We know they will not honour a ce 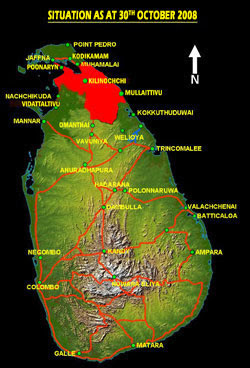 asefire now. Let them lay down their arms and surrender. We will declare a ceasefire."

He disclosed that Indian Prime Minister Manmohan Singh did not mention about a ceasefire during their recent telephonic conversation.

"No, he didn't request me to declare a ceasefire. His concern was about the Tamil civilian population. India has been fair. It is focused on the humanitarian issue, especially of the Tamils in the North and the East, which we are taking care of."

"I agree that there can be no military solution. Soon after I took over, we appointed an all party committee to look into this issue. I believe that if the southern political parties, that form the majority, do not accept a political solution then we can't implement it. I don't want to thrust a solution on parties.

If I can have all the parties agree to a solution to solve the problem it would be appreciated by the people. Otherwise there will be riots and no Government will be able to implement it," the President noted.

Asked as to why the Government sent out humanitarian agencies from the war zone, he replied: "We have only prevented those NGOs that were helping the LTTE consolidate, with some even transferring weapons and money.

Plus, when fighting was going on, there was concern about their safety. But we do allow the UN and Red Cross to supply food and medicines, which in any case is distributed by the Government. We are not harassing Tamils. This war is not against Tamils or Muslims. This war is against terrorism. That has to be understood
Posted by SRI LANKA TODAY at Monday, November 03, 2008

80% of the war completed – Army Chief

80% of the war completed – Sri Lanka Army Chief
Army Commander Sarath Fonseka today said that 80% of the war has been completed so far and the army had killed some 12,000 LTTE cadres.

The final document of the All Party Representative Committee (APRC) will be ready when the present military campaign concludes shortly, APRC chairman, Science and Technology Minister Prof. Tissa Vitarana said.