LTTE military operation and administrative headquarters in Kilinochchi was destroyed in aerial attack. 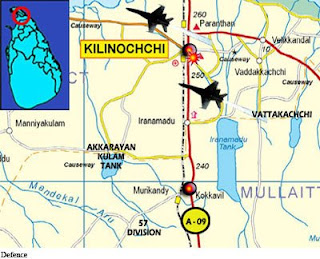 LTTE military operation and administrative
headquarters in Kilinochchi was destroyed in aerial attack.

Army spokesman Brigadier Udaya Nanayakkara said that the LTTE conducted its terrorist activities from this headquarters. It was located two kilometers northeast to the Kilinochchi town.

Wing Commander Nanayakkara denied LTTE allegation through their websites that their peace secretariat was destroyed by the aerial attack. He said to 'Lanka-e-News' that the administrative center was located away from the peace secretariat. He said that the pilots verified the target was achieved and they monitored destruction was caused.

He said that he believed that there was military gear including communication equipment.

Former Minister of Trade and Commerce and Southern Province Governor Kingsley T. Wickremeratne passed away lat night (01). He was 69 years old at the time of his death.
The late Government, Wickremaratne was born on October 3, 1939. He joined the SLFP in 1974.

Mr.Wickremaratne was elected to parliament in 1989 and was re-elected at the General election of 1994 representing the Colombo district. He was appointed Minister of Trade, Commerce and Food by former President Chandrika Kumaratunga.
Posted by SRI LANKA TODAY at Friday, October 03, 2008