Air Force spokesperson Wing Commander Janaka Nanayakkara speaking to defence.lk said that the first of the 3 air raids was taken at 6.30 AM targeting an LTTE communication centre located 3Km , northeast of Paranthan.

In addition, two air raids were taken at 7 AM targeting an LTTE leaders' hideout located 2km northeast of Kilinochchi town, he said.

At the same time, the third air strike was taken targeting a den of LTTE suicide bombers, also known as Black Tigers located 1.5 Km west of Paranthan, he added. 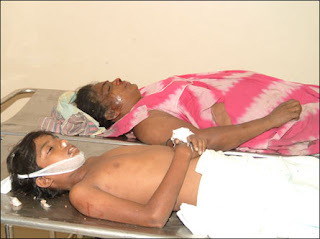 tamilnet.com web Two civilians, a 46-year-old teacher and her 11-year-old daughter were killed and seven including her 14-year-old son and another boy at the same age, were wounded at Kumarapuram. The wounded were rushed to Ki'linochchi hospital, still functioning at Ki'linochhci town. 12 houses were destroyed in the attack at Kumarapuram. A Saiva temple, Kumarapuram Murukan koayil, and a shop were also destroyed in the air-strike.
(Pix:Dead bodies of the teacher and her daughter killed in SLAF attack, photographed at Ki'linochchi hospital)

The teacher killed in the attack was identified as Arumainathan Chandrathevi, 46. She was a teacher at Pazhai Central College. After displacement, 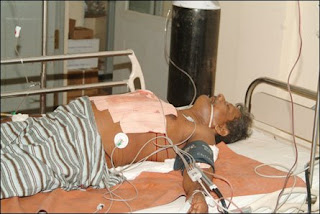 she was teaching at Hindu Maha Viththiyaalayam. Her 11-year-old daughter, Achchika, succumbed to her wounds at Ki'linochchi hospital. Her father, 52-year-old Thamotharampillai Arumainathan and a 14-year-old brother, A. Ajithan, sustained injuries. Mr. Armumainathan was rushed to Ki'inochchi hospital with serious injuries. Their house was fully destroyed.

Sri Lanka inks historic agreement with the State of Palestine 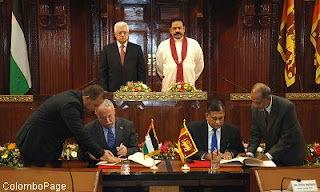 The two Foreign Ministers of Sri Lanka and the State of Palestine, Rohitha Bogollagama and Riad Malki sign the agreement on behalf of their respective governments. 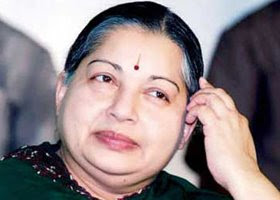 The former chief minister of Tamil Nadu and leader of the state's major opposition party, in a press release, clarified AIADMK's stand.

She also said that her party accepted the demand for Tamil homeland with self-governance within a united framework of a Sri Lankan constitution.

The AIDMK supported the prolonged struggle of Sri Lankan Tamils for their right to self determination, declared Ms. Jayalalitha.

At the same time, she denounced terrorist activities that caused internal strife among Sri Lankan Tamils and disturbed the rule of law within India.

Ms. Jayalalitha was very careful in not allowing her statement to be interpreted as extending support to the LTTE, analysts in Chennai said.

However, they described her move as a landmark declaration as it recognised two important principles of Tamils' struggle, their right to self-determination and a solution based on self-governance in their traditional homeland.

Ms. Jayalalitha has sought to clarify her stand and the stand of her party and specified AIDMK's policy on four points:

1. Not Secondary Citizens: Tamils have equal rights as all other citizens of Sri Lanka. They are not secondary to anybody.

2. Equal Rights: We completely support the prolonged struggle of Tamils seeking equality before law and equal opportunities in education and employment.

4. Self-governance within united Sri Lanka: We understand and accept the demand of Tamils that they shall create a Tamil homeland where they have the power of self-governance, under the framework of a Sri Lankan Constitution.

President of Palestine, Mahamoud Abbas arrived in the island a short while ago. He was warmly welcomed by President

Mahinda Rajapaksa on his arrival at the airport.
The Palestinian President will hold talks with President Mahinda Rajapaksa and several ministers of the Government pertaining to issues of bilateral interest during his two day stay .
He will also be visiting Syria before returning home.
Warm Welcome-Pix By P. D. Ranjith 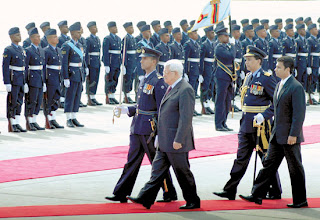 Mahmoud inspects a Guard of Honour on arrival at the Bandaranaike International Airport. Picture by Saman Sri Wedage(Daily news) 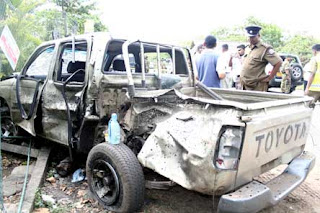 Agriculture Minister and SLFP General Secretary Maithripala Sirisena escaped an assassination bid yesterday when a suspected LTTE female suicide bomber pounced on his convoy at Pirivena junction in Boralesgamuwa and blew herself up, killing one and injuring six others, including 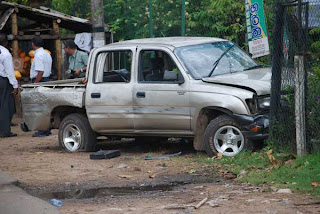 Seven others including Deputy Minister of Agrarian Services Siripala Gamlath have sustained injuries. According to the hospital sources , Minister Gamlath has suffered only minor injuries. Five of the injured have been admitted to the Teaching Hospital, Kalubowila, the sources added. One of the injured has succumbed to injuries, latest hospital reports stated.

The bomber, who was waiting for her target at the 7th milepost at Katuwawala, Pirivena junction jumped on the minister's convoy as it was returning after the launch of a paddy cultivation event in Bandaragama, but missed his car and instead struck two backup vehicles.

This will be end of LTTE terrorism - President

This will be end of LTTE terrorism - President


President Mahinda Rajapaksa told Al Jazeera television in an interview that this would be the end of the LTTE terrorists' battle for a separate State, adding that the terrorists should surrender to the military.

"LTTE cadres are willing to surrender to the Security Forces and many have done so," President Rajapaksa told the interviewer Tony Birtley.

He said that successive Governments in Sri Lanka had tried to persuade the LTTE to negotiate a political solution and failed, and that under the circumstances, the Government could not offer anything else to the terrorist group.