The Feast of St.Anthony’s Kochchikade, Colombo will be celebrated today. The statue of St. Anthony is scheduled to be taken in procession at 6.00 p.m. after the celebration of Holy Masses in all three languages. The first Mass, in Tamil is scheduled for 8.00 a.m. the second in Sinhala at 10.00 a.m. and the third in English at 12 noon. This picture of the illuminated Church was taken Wednesday night (.pix by Joseph Ranmuthgugala from island) 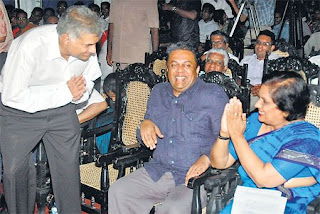 Aubowan, we are good friends


Former president, Chandrika Kumaratunga, addressing the SLFP (M) Group’s inaugural convention said that the nation should be spared from being rapidly drawn into extremism and authoritarianism, and that that could be done by all sections getting together.

She said that it would take a massive alliance, comprising all political parties that respect democracy, freedom of expression and human rights, to overcome the present political, social, economic and military crisis within the country.
“I am saying this without enmity towards or envy of anyone. I have attained all the high offices that a person in this country could attain. Although I am no longer the president, I still experience the love and kindness of our people,” she said.

She added that she received lot of harassment and death threats after she left office and that lies were spread about her.

“It is unbearable and very sorrowful for me to see the country that we restored with much effort falling apart. I ask everyone to discard personal animosities and greed for power and money and come forward to rebuild the country,” she said.

She added that the freedom of the people was curtailed, affecting creativity and the ability of the people to work with responsibility. She said that the economy would face a crisis if the government did not come up with a correct, efficient and suitable economic programme.

When there is corruption within the ruling system of a country it creates income disparities which result in the deterioration of human rights and discipline in the country, she said.

Opposition Leader Ranil Wichremesinghe speaking at the occasion asserted that the government should not suppress persons who hold different opinions from the government.

He said that the people should unite to protect Media Freedom before anything else and that the media had the right to question battle strategies which helped to assess the success and the failure of plans made by the head of state which could result in death of soldiers and civilians.

“The soldiers will also question the suitability of battle plans on which their lives depend.” he said.

Meanwhile SLFP (M) Group leader Mangala Samaraweera said that the ‘Rajapaksa Clan’ was responsible for the economic, social and political crisis within the country.

He reiterated the need for a massive alliance with the participation of other political parties to topple the government.
Posted by SRI LANKA TODAY at Friday, June 13, 2008 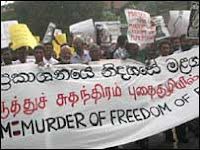 The European Commission has expressed serious concerns over Sri Lanka's human rights record.A senior official - Joao Aguiar Machado - said the EU might withhold an aid package worth a hundred million dollars if the situation did not improve

.Human rights groups have accused the government of failing to control killings and disappearances since hostilities with the Tamil Tiger rebels intensified in 2005.

The government said the human rights situation had improved, but admitted there had been concerns about rights violations in the past. EU logo

The commission said the package was dependent on Sri Lanka removing barriers to humanitarian assistance, including resolving visa issues for Red Cross and U.N. workers in the country.

"We expressed our serious concerns with the human rights situation in Sri Lanka, as indicated by a range of sources including reports from United Nations rapporteurs," Deputy Director General for External Relations of the European Commission Joao Machado said in a statement.

"If you look at 2007, the situation of disappearances and other incidences are better than 2006," said Rajiva Wijesinghe, an official at the Ministry of Human Rights.
Posted by SRI LANKA TODAY at Friday, June 13, 2008