The 63rd Independence Day was celebrated at the High Commission Office of Pakistan at Colombo in a simple and dignified ceremony. 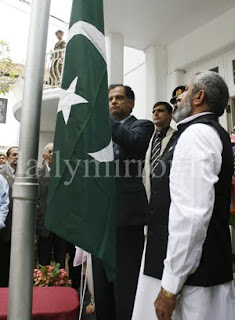 In his message on the auspicious occasion of Independence Day, The High Commissioner of Pakistan Shaheen A Gilani said that the Quaid envisioned Pakistan as a modern and progressive state. The government and people of Pakistan are committed to achieving the goal of making Pakistan a moderate, progressive, democratic, self-reliant and Islamic welfare state.

It is a matter of great satisfaction that Pakistan and Sri Lanka continue to maintain their traditionally close and mutually beneficial relations in all fields. The process of bilateral cooperation has been greatly assisted by increased interaction both at the level of the people and the highest government functionaries of the two countries. The volume of trade between Pakistan and Sri Lanka has registered impressive gains since the signing of the Free Trade Agreement in 2005.

The President of Pakistan Mr. Asif Ali Zardari in his message said that sixty two years ago, on this day, a separate homeland was created wherein we could live in freedom and shape our lives according to our values. Today therefore is a watershed mark in the history of the country and an occasion for joy and celebrations. On this occasion I also wish to reiterate that the PPP which has given a manifesto of peace and prosperity will pursue the goal of peace with honor and good neighborly relations with countries in the region. We will endeavor to give hope to the people through roti, kapra and makan and by providing them employment, education, energy and safe environment.

PICTURE-2:High Commissioner of Pakistan Shaheen A. Gilani speak to the ceromany. Defence Adviser Colonel Syed Khurram Hasnain also here .In his message, the Prime Minister of Pakistan Syed Yousuf Raza Gilani said that the country and the people are confronting a serious challenge posed by the terrorists and militants. However, it is heartening to note that the entire nation has stood up against these elements and we would Insha Allah defeat their evil designs to make this country secure and peaceful. The objective of the people’s government is to strengthen the country and to make it prosperous. This is the basis of our different programmes designed for the welfare of common folk of Pakistan. To achieve this objective, we are focusing on addressing and solving every problem.

A large number of Pakistan community, officials, dignitaries, journalists and others attended the ceremony.
Posted by SRI LANKA TODAY at Saturday, August 15, 2009 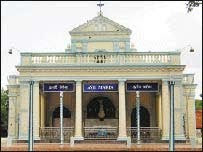 For the first time, after the military defeat of LTTE, over two hundred thousand devotees from various parts of the country participated at the Vespers Service at the Church of Our Lady of Madhu on Friday.
The mass was conducted by the former Archbishop, Fr. Oswald Gomis.
Farther Damien Fernando speaking from Madhu Church said the atmosphere there was peaceful and serene.
“People were keen, very confident and supportive”, he said.
He said that there was tremendous support from the security forces for the devotees who are arriving in Madhu to take part in the final ceremonies on Saturday and Sunday.
Farther Damien Fernando said facilities except for a shortage of drinking water are available to devotees.
“Rain on Friday made the environment little difficult but the situation has now improved”, Farther Damien Fernando added.
http://www.bbc.co.uk/sinhala/news/story/2009/08/090814_madhu.shtml
Posted by SRI LANKA TODAY at Saturday, August 15, 2009