Suicide bomber came on a motorcycle; No remains found

Suicide bomber came on a motorcycle; No remains found

Police suspects that the suicide bomber who exploded himself at the Jumma mosque in Godapitiya, Akuressa today (10) morning, came on a motorcycle.Police media spokesman SSP Ranjith Gunasea said to Lanka-e-News that the bomber attacked from the rear side of the ministers? motorcade as they were getting down the vehicles at the entrance of the mosque to take part in the function held there. The explosion occurred around 10.20 AM.
Posted by SRI LANKA TODAY at Wednesday, March 11, 2009 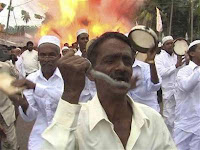 ong the Islamic devotees proceeding to the mosque in a procession.
The targeted civilians were attending to the national Milad-Un-Nabi celebration , held at the mosque. The festival marking the birthday of the Prophet Mohammed is celebrated as a national festival in Sri Lanka.
Meanwhile , hospital sources said Minister Mahinda Wijesekara who was also attending the celebration suffered serious injuries in the explosion. The sources added that another 46 people with injuries were admitted to the government hospital Matara and elsewhere. Five other government ministers; AHM Fowzie, Mahinda Yapa Abeywardena, Pandu Bandaranaike, Chandrasiri Gajadeera, and Minister Amir Ali had narrow escapes. Among the deceased and injured were several local government representatives
Posted by SRI LANKA TODAY at Wednesday, March 11, 2009