Addressing a huge congregation at the Vatican's St Peter's Basilica, he appealed for a new understanding between Israelis and Palestinians.

Thousands of pilgrims celebrated the start of Christmas in the West Bank town of Bethlehem, amid tight security. 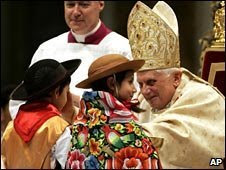 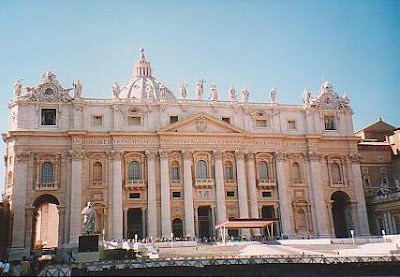 The Pope will deliver his Christmas Day message from St Peter's later.

Appealing for new efforts to end the cycle of violence in the Middle East, Pope Benedict urged people to pray that "hearts will be opened, so borders will be opened".

The 81-year-old pontiff plans to visit Jordan, Israel and the Palestinian territories next May, although final details of his trip have yet to be worked out.

Also in his homily, Pope Benedict appealed for an end to child abuse.

"Let us think of those street children who do not have the blessing of a family home, of those children who are brutally exploited as soldiers and made instruments of violence, instead of messengers of reconciliation and peace," he said.

"Let us think of those children who are victims of the industry of pornography and every other appalling form of abuse, and thus are traumatised to the depths of their soul.

For those unable to enter, giant screens were set up in St Peter's Square.

Most of the world's 2.1 billion Christians mark Christmas this week.