JVP MP Vijitha Herath said today the appointment of Sivanesathurai Chandrakanthan alias Pillayan as the Chief Minister was a fulfillment of Indian interests, and the government had sown ethnic discord among the communities in the East through this exercise.
Posted by SRI LANKA TODAY at Saturday, May 17, 2008

Leader of the TMVP,(former LTTE combatant} Sivanesathurai Chandrakanthan alias Pilleyan was sworn in as the Chief Minister of the Eastern Provincial Council before President Mahinda Rajapaksa May 16th evening at the President Secretariat.Pilleyan ia 30 years old and very youngest Chief Minister in Sri Lanka. 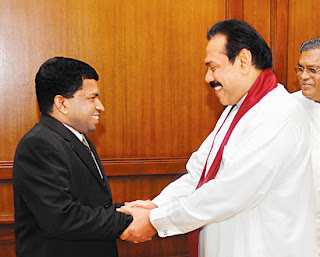 There are five ministerial posts in the Eastern Provincial Councils and they were accorded as follows:

Another ministerial appointment has been reserved for a Muslim representative, while the Chairman, Deputy Chairman, Leader of the House and Chief Government Whip are yet to be named.

Meanwhile, the Hisbulla Group councilors sent a letter to the Governor of the Eastern Province, Rear Admiral Mohan Jayawickrama protesting the appointment of Pillaiyan as the Chief Minister.Hisbullla team boycott the swearing-in ceremony.

Mr. Hisbulla says that he, together with Mohammed Sali and Mohammed Subair signed the letter sent to the Governor. He has informed that the three councilors will act as an independent group in the Provincial Council.

Before sending the hasty letter, Mr. Hisbulla agreed appointing Pillaiyan as Chief Minister at a discussion held this morning with the President.
Hisbulla who resigned from Sri Lanka Muslim Congress joined with the United People's Freedom Alliance (UPFA) expecting the Chief Minister post and together with the other two members.
Posted by SRI LANKA TODAY at Saturday, May 17, 2008

The death toll of the Fort bomb explosion had risen to 10
Posted by SRI LANKA TODAY at Saturday, May 17, 2008