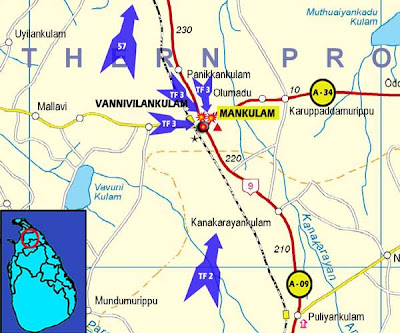 Sri Lankan troops have captured a strategically important town used by the Tamil Tigers as a key supply route to the island's north, the army says.it is the first time in recent fighting that the army has captured parts of the A9 highway leading to the Jaffna peninsula.
Military spokesman Brigadier Udaya Nanayakkara said that the army took control of Mankulam town on Monday.

He said that in capturing the town the army had cut off rebel supply routes. The town has been in rebel hands for since 1999 and lies near the A9.

The army says that the town was captured after several hours of heavy fighting and is important because it lies on a strategically important junction of the road, giving them control of the north, south and east.

The A9 is the main way of travelling overland from the centre of the island to the north.

But correspondents say that the rebels seldom used the route because they knew it would make their forces vulnerable to land and air attacks by the army.