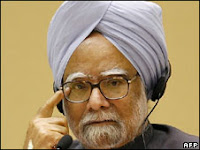 Indian PM Manmohan Singh is due to meet US President George Bush amid frantic efforts to win US Congressional support for the two countries' nuclear deal.

The controversial accord needs to be rushed through Congress before lawmakers conclude this year's session to campaign for November's elections.

Correspondents say its ratification will be a complicated process.

US officials hope Congress will approve

the deal before the two leaders meet later on Thursday in Washington.

Congress goes into recess at the end of this week.

President Mahinda Rajapaksa, addressing the 63th Session of the United Nations in New York today (24), said "the Government would not and cannot let an illegal and armed terrorist group, the LTTE, to hold a fraction of the population, a part of the Tamil community, hostage to such terror in the northern part of Sri Lanka and deny those people their democratic rights of dissent and free elections."

The President, who pointed out that terrorism is a fast spreading phenomenon, observed that the United Nations has a grave responsibility to save today's and succeeding generations, from this new and continuing menace.
Posted by SRI LANKA TODAY at Thursday, September 25, 2008